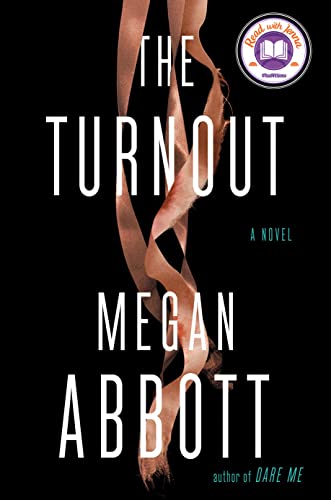 “With the slower pace of a psychological thriller, the tension is high and the twists at the end demonstrate why Abbott is an award winning and bestselling author with another hit on her hands.”

They own the building in which the school resides, “a squat, rusty brick office building downtown.” A building which belongs to them because their parents died together “on a black-ice night more than a dozen years ago, their car caroming across the highway median.”

They also own the family home, where the sisters have lived together since childhood, with Charlie, the final member of their tiny family. “Once their mother’s prize student, her surrogate son, her son of the soul, and now Dara’s husband.”

Unable to dance any longer because of intense physical pain from injuries sustained throughout his career, Charlie runs the business side of the dance school.

The years have rolled along for the sisters and Charlie, running the school with little change. Much of their energy remains focused on the end of the year and The Nutcracker, the annual event that keeps the school in the black and all the little girls dreaming of playing Clara.

“It happened every year at this time, the chill in the air, the twinkle in all the girls’ eyes, their arms high in fifth position. It was Nutcracker season.”

The students turn vicious as the sisters cast the next Clara. The lucky girl’s name posted on the board for all to see. “A necessary evil, The Nutcracker was. It took over everything.” The unpicked girls take out their frustration on the chosen one, their cruelty furtive, but constant.

This year, however, The Nutcracker is the least of the Durant sisters’ worries.

The fire. An accident, “a great fog from which emerged a baby-faced fireman carrying an old metal space heater, its center mussel-black.”

Repairs must be made. Enter Derek.

“He was coming, the contractor was on his way. Derek something. Someone recommended him. Dara couldn’t remember at first, but wasn’t it Mrs. Bloom?”

Derek is a dark force that sets the sisters on a dangerous path. Arriving to fix the damage done by the scorching flames, he soon upsells the sisters into major renovations.

But nothing is ever finished, the bills are piling up, and the school is in constant disarray.

Like the dance world itself, the sisters’ lives looked delicate and balanced from the outside, but underneath the damage from their chaotic childhood can no longer be held in check.

Derek is a destructive force, but he can only gain a toehold because rot already existed. Long held secrets and failures rise to the surface just like the floorboards peeled up and the interior of the rehearsal room stripped bare.

As with all good suspense, Abbott creates an environment that functions like a character. The grueling commitment to the physical requirements, the extensive damage to the body, the constant struggle to become recognized in the dance world.

Throughout the course of the novel, Abbott expertly weaves the history of the characters, the strain of artistic goals, and the destructive force of Derek into its own kind of dance. Her words are like music, short chapters and sections build rhythm, harmony, and texture.

With the slower pace of a psychological thriller, the tension is high and the twists at the end demonstrate why Abbott is an award winning and bestselling author with another hit on her hands.