A Turn in the Road (A Blossom Street Novel) 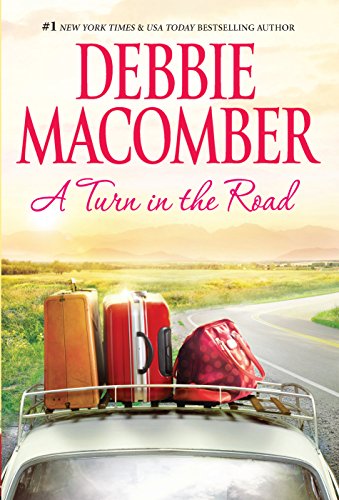 Fans of Ms. Macomber’s contemporary fiction will be delighted with this newest release of her Blossom Street series. Not only does she manage to dig deep into emotional issues many face, but she also introduces the reader to the struggles and triumphs of three generations of women.

Bethanne Hamlin, divorced from husband Grant for six years, decides to accompany her ex-mother-in-law, Ruth on a cross-country road trip. Ruth desperately wants to attend her fiftieth high school reunion in Florida and is determined to drive from Seattle, making a trip she yearned to travel all her life. Bethanne, whose relationship with Ruth is strong, impulsively chooses to accompany her. Grant left Bethanne to marry a younger woman and now realizes he made a mistake.

After his second marriage sours, he wants Bethanne back, but she does not know how she feels. She will always love him, especially after sharing a 20-year marriage and two children. Destroyed when he left, Bethanne managed to put her life in order, start her own business and become a successful entrepreneur. Can she trust him enough now to go back to what they once had?

Bethanne’s daughter Annie, sure her boyfriend Vance is about to propose, is shocked to learn he plans to go to Europe for a year with his friend Matt and Matt’s girlfriend. Annie, angry and hurt by his decision, decides to join her mother and grandmother on their trip.

The three leave Seattle with Ruth’s itinerary in place, but decide to veer off course for some excitement. Their rental car breaks down leaving them stranded, and a group of bikers shows up—the same men they had met at a restaurant earlier that day. Bethanne brazenly asks for help, and Max, one of the group members, drives her to the nearest town for a tow truck. Both Ruth and Annie are appalled at her for leaving with a stranger. As she spends time with Max, Bethanne finds herself being drawn to the introverted biker, much to the consternation of her ex-mother-in-law and daughter.

Meanwhile, Ruth is eager to get to Florida not only for the reunion, but to right a wrong she did 50 years ago when she “dumped” her high-school sweetheart. Learning Royce would be attending the reunion, Ruth plans to apologize to him. She also wonders if there are still sparks between them, especially after being a widow for a long time.

Annie constantly received texts from Vance telling her how much he misses her, and she does not know how to respond. Though she is furious, she cares deeply for him. In addition to fretting over Vance, she is adamant about getting her parents back together and calls Grant every day to fill him in on what is happening.

Throughout the long trip, the three agonize over their lives and the decisions they must make. Ruth wonders if Royce will forgive her for hurting him many years ago. Will they be able to rekindle that old flame? Will Annie forgive Vance or will she meet someone else she can trust and depend on? Most of all, what will Bethanne do about Grant? Will she go back to a man she shares a history with or be swept off her feet by a hunk on a Harley?

The descriptions of various cross-country stops highlight the love and bond three generations of family members share—as well as adding color and humor to a heartfelt story.