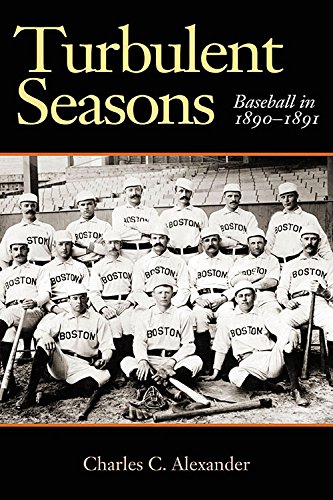 When late in the 1800s the professional baseball players formed a union and set up their own league, they caused a revolution of sorts in pro ball. The owners of the other two major leagues, the National League and the American Association, found the Players’ League heavy competition, not because the players were good organizers but because the players had found rich backers who hoped to make money exploiting the new situation.

Can you imagine what professional baseball was like with three leagues all competing among each other for the best players and the richest territories? Charles Alexander sorts it all out for us, starting with what earlier researchers found and giving more details than ever known before about which players violated their contracts to change leagues for how much money and why, all enlivened by the published accusations and insults by owners, players, and reporters. Bribery became as common as player drunkenness. Suspicions and accusations of game-throwing didn’t help. The heightened sense of outrage caused not only libelous statements in the press but also vicious fights on the field.

Mr. Alexander presents a small slice of history—an era that is part of baseball’s colorful past, populated by posturing owners, flawed umpires, excellent and poor players, and reporters who thought they knew better than anyone else how to run baseball. In this writer’s hands, the messy situation becomes clarified.

The war among the leagues as told by Alexander is punctuated with tasty stories about player dissipation (getting home after a party at 5:00 A.M.) and about owners suing each other, lying about their attendance figures, and calling each other names—all of it fodder for reporters who seemed eager to pounce on negative news.

The narrative finally ends up in the expected way: when the owners had finally lost as much money as they thought they could stand to lose, they met with each other and parceled out players and territories, eliminating some of each to compress the three leagues into two. The players, who started it all, were excluded from these meetings and not permitted any say in the peace terms. The owners then chose only those players they wanted for their teams and assigned them as they desired, while the players had to assent to their assignments or leave baseball. The Players’ League died and was never resuscitated.

It’s obvious from his bibliography that Mr. Alexander keeps up with the latest in baseball historiography. One of the fascinating new bits of information he has included is the work of Ella Black, a woman writer for a popular newspaper called Sporting Life. He discovered that her impressions of baseball events were for a while carried in its columns. Turbulent Seasons also features beautiful full-page cabinet portraits of many of the era’s important baseball figures, like owner and sporting goods businessman Albert G. Spalding, player and then owner Charles Comiskey, and player/attorney/union leader John Montgomery Ward.

At the end of the book Mr. Alexander includes an Appendix called “Some Lives Afterward,” which functions much like an Epilogue, giving us short descriptions of the later lives of figures important in this period like pitcher Cy Young and player John McGraw. That helps ease the rather abrupt ending of the text, which presents only a few short paragraphs about the era that follows this one.

Turbulent Seasons is in the tradition of other recent books that concentrate on only a brief period, like Cait Murphy’s Crazy ’08: How a Cast of Cranks, Rogues, Boneheads, and Magnates Created the Greatest Year in Baseball History (Smithsonian, 2007) and 1921: The Yankees, the Giants, and the Battle for Baseball Supremacy in New York, by Lyle Spatz and Steve Steinberg (University of Nebraska Press, 2010). Intensive studies of a brief period do us all a service, immersing us in the events of the time and helping us live again those exciting moments of the past.