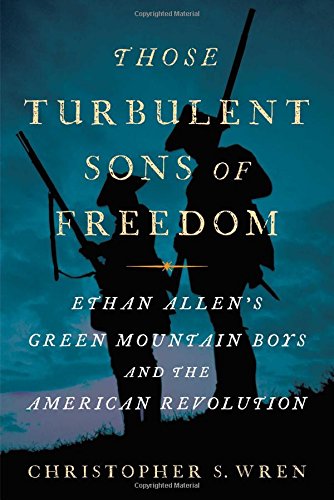 For weal or woe, many names stand out in the history of our revolution against Great Britain: Nathan Hale, George Washington, Benedict Arnold, and Ethan Allen, for example. The latter is primarily known for leading the assault on and capture of Fort Ticonderoga on Lake Champlain. However, both he and the men he led in that instance had many other adventures and experiences over the course of the war.

Having said that, one should be made aware that this particular book recounts these events but also includes those of, primarily, two other Green Mountain leaders as well as the circumstances of how the state of Vermont came to be, inasmuch as it was not one of the thirteen states comprising the original Union.

The other leaders mentioned above include an Allen cousin, Seth Warner, and their friend, Justus Sherwood. The latter, interestingly enough, remained loyal to the British Crown, attempting to maintain the wilderness that became Vermont as part of the Empire. He and Allen, not surprisingly, became bitter rivals in this and the disputed land claims which formed the basis of the original conflict in that part of America.

He, early on along with Allen and Warner, opposed what the three men called “the Yorkers”—New Yorkers—when it came to political jurisdiction, land deals and the titles thereto in an area known as the Hampshire Grants, ultimately becoming Vermont and deriving its name from the French “monts verts” or the Green Mountains.

Certainly recounted is the Patriot assault on Fort Ticonderoga in which Allen played such a prominent role. However, in a subsequent effort to invade, take Canada and bring it into the new Union forming under Congress, Allen was a member of that failed attempt and captured by the British. As an obvious rebel, he was shipped back to Great Britain where it was anticipated that he would swing from the gallows for his treasonous activities.

That didn’t happen for reasons unmentioned here, and he was able to return to America, yet was mistrusted by George Washington and never really held another particularly important position in the cause of liberty, in view of his ongoing disputatious nature.

His Green Mountain Boys, meanwhile, had been under the command of Warner, after Allen’s capture, and their continued efforts in the wilderness in Burgoyne’s campaign aided materially in the Battles (and Continental victories) at Saratoga and Bennington.

All the while, Sherwood and Allen were both intrigued with the British, engaging in machinations which, depending on the individual, might have resulted in either a British province or colony or an independent republic. The back-and-forth negotiations are covered extensively in the text and form quite an interesting story largely unknown to most Americans who likely assume that Allen and his ostensible patriots were firmly in the Continental camp.

With the end of the Revolutionary War, the issue of Vermont stood out like a sore thumb. George Washington felt that it would do “less damage in the United States than outside” as a constituent part of the Union and even considered using it as springboard for another invasion of Canada. As it was, Massachusetts, New York, and New Hampshire all dropped their claims and Vermont was admitted to the United States as the 14th state.

In any event, this book says much about Vermont, its early leaders and citizens and their historic tendency to go their own independent way over the years.

As the author is a journalist and not a professional historian, there are no footnote citations in the text. However, the notes section, divided by individual chapter, and the bibliography itself do demonstrate considerable use of primary and secondary sources in books, articles, manuscripts, and archives.

There are no maps, which is unfortunate as they would provide context, show relative distances between important locales as well as those locations which feature prominently in the story for those unfamiliar with Lower Canada and the New England areas.

This is pretty much an all-inclusive story, much more so than just a biography of Ethan Allen or an account of the Green Mountain Boys. It provides a lot in the way of behind-the-scenes events and fairly obscure information for the edification of all who may be unfamiliar with the rich history of Vermont.