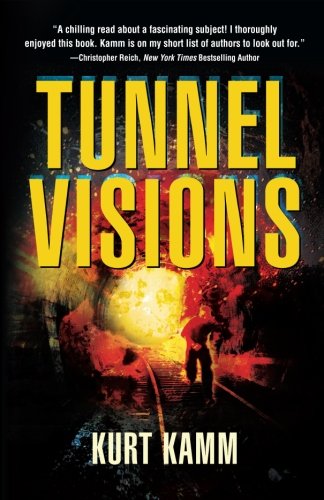 “Kamm calls on his vast experience with the L.A. County Fire Department . . . to insert the reader into the midst of all the action. . . . Photos of the Sylmar Tunnel, its victims and responders, make this story a must read.”

Having previously read a couple Kurt Kamm novels, I was anxious to get started on his newest offering, Tunnel Visions. As expected, Kamm does not disappoint.

Tunnel Visions is a gripping historical piece of fiction that tells the story of the actual California Sylmar water tunnel disaster of 1971. A methane explosion in the nearly completed tunnel claimed the lives of 17 miners. At the time of the tragedy, only 2,000 feet of the project remained unfinished.

Southern California has always been plagued with water problems. In 1969, to alleviate some of that burden, the Sylmar project began. The complex undertaking was designed to transport water to dry areas. As the work progressed, the huge 27,000-foot water tunnel, which was to run beneath the town of Sylmar, was two years ahead of schedule.

In the beginning, not only was the project daunting in scope, but its construction brought to the fore the simmering issue of water rights in California. That contentious issue of who gets water and from where still boils over today, spawning a new generation of water activists; however, before the tunnel was completed, a deadly methane explosion effectively shut it down.

Central to the story is Nick Carter, a Los Angeles fire captain and member of the L.A. Urban Search and Rescue Task Force. Nick’s father was one of the miners killed in the Sylmar tragedy. At least that’s what his mother told him. Questions surrounding his father’s death have haunted Nick for years. He’s never been able to find answers regarding exactly how his father died. More questions than answers find Nick doggedly pursuing the truth.

Nick’s fiancée, Cindi Burns, is an ATF special agent. She’s also assigned to the task force. Both she and Nick become integral to the instant investigation involving a threat to blow up a water plant. Such an explosion has the potential to damage the surrounding water delivery infrastructure and the immediate neighborhoods. Nick’s call to action couldn’t come at a worse time—it’s the same day he planned to propose to Cindi.

The author does a splendid job of character development. We see both the professional and personal sides of Nick and Cindi. The surrounding cast of characters adds to the thrilling story. The action is exciting and credible.

Kamm calls on his vast experience with the L.A. County Fire Department, as well as his assistance in fighting several wildfires, to insert the reader into the midst of all the action. To add to the realism, the author includes a photo archive at the end of the book. Photos of the Sylmar Tunnel, its victims and responders, make this story a must read.