Tunnel 29: The True Story of an Extraordinary Escape Beneath the Berlin Wall 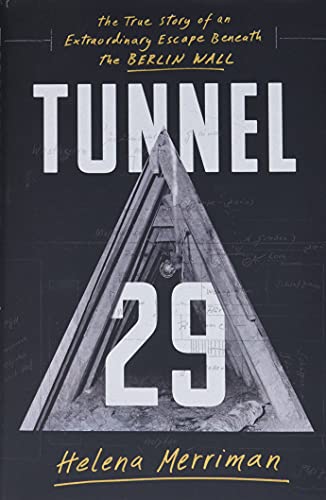 “Tunnel 29 is a riveting story about what happens when people lose their freedom. A true hero risks everything to win it back for those he did not know.”

We live in an age where the term “hero” is overused. All police officers are called heroes when they perform their jobs. Nurses and doctors with COVID patients are heroes for their work treating the sick. The use of the term is so widespread that it has lost its distinctive meaning. A hero is a person who performs truly remarkable accomplishments or who possesses noble qualities. Policeofficers, doctors, and nurses perform important functions in their jobs and offer notable examples for the next generation, but they don’t consider themselves heroes. They are just doing their chosen jobs.

Helena Merriman, a BBC journalist, has told the story of a genuine hero in Tunnel 29: The True Story of an Extraordinary Escape Beneath the Berlin Wall. Joachim Rudolph was an engineering student in West Berlin in 1961 when the East German government erected a wall to divide East and West Berlin. The repressive Communist government faced a significant catastrophe. Tens of thousands of East Berliners had fled the enclave for the western outpost of modern life in West Berlin. To keep its remaining populous from fleeing, the Democratic Republic build a concrete barrier.

Merriman’s story is absolutely compelling, written in the style of a novelist, but based totally on the author’s interviews with the men and women who participated in the most successful escape of the Cold War. She had access to documents that had been released from the secret police files after the “workers’ and peasants' state” fell in 1990.

Merriman’s narrative is chilling. The VoPos—the East German armed guards—were ruthless and trigger-happy. The Stasi—the secret police who enlisted thousands of spies to control the populous of East Berlin—were unrestrained. Tother they made the Berlin Wall an international symbol of tyranny.

Joachim Rudolph had escaped East Berlin when the Wall was first constructed. There was no reason for him to return. He could have continued his post-secondary education, but he did not. He planned a tunnel from West to East Berlin through which 29 freedom seekers escaped.

Joachim was a true hero because, unlike all his other compatriots, he was not digging just to free members of his own family. He was motivated by a genuine desire to free others. The task was arduous. The tunnel leaked water, and the walls and ceiling crumbled. Merriman relates: “The first thing that hits him is the smell. Coal dust. Then he feels it. It pours out, onto his head, his shoulders and into his eyes until he is blind with it.”

Merriman tells the story as a fine reporter. She makes you identify with the participants. While the risks inside the tunnel were immense, the greater dangers lay ahead. The VoPos patrolled the “death strip” on the streets near the Wall. They would shoot anyone involved in a project like Joachim’s.

The Stasi were equally horrific, reminiscent of the Nazis they replaced. Children spied on parents; neighbors watched each other. In fact, a Stasi spy was associated with the tunnel, but Joachim suspected him and kept him at arm’s length. At any time throughout the months of digging any slip-up could blow up the tunnel and end the lives of Joachim and his colleagues.

As a matter of pure chance, an NBC news producer found out about the tunnel early in its construction. Reuven Frank quickly realized the possibilities of a significant documentary. His finished product was an extraordinary testament to freedom.

Tunnel 29 is a riveting story about what happens when people lose their freedom. A true hero risked everything to win it back for those he did not know.