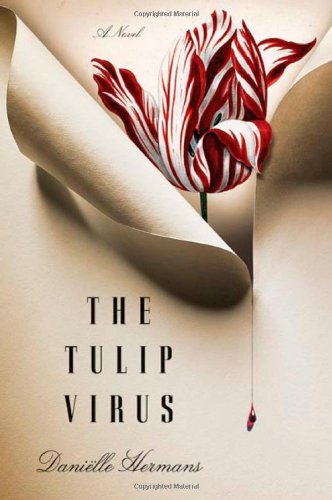 In the wee hours of a London morning, a wealthy, elderly man, Frank Schoeller, is brutally attacked in his home. He manages to contact his nephew, Alec, who rushes to his uncle’s side moments before the man expires. But before he dies, Frank thrusts a beautifully bound, very old leather book into the young man’s hands, leaving only one bloody thumbprint beneath the word “Tulipa” within the pages, and a whispered warning, “No police.”

From that point, this taut thriller, a debut work by the author, unfolds with dramatic timing that is enhanced by a dual story—one a narrative of the tulip craze in seventeenth century Holland and the events that brought about the bursting of that bubble, and the other set in the present, but with enough intrigue to hint at the connection between the two.

Alec Schoeller and his friends, Damien and Emma, are determine to solve the murder of his uncle, in spite of Scotland Yard’s admonition to leave the work to the police, and Alec keeps secret the book that was entrusted to him.

It is obvious at the onset that their task is fraught with peril, especially on the heels of a second, related murder of a colleague of Frank’s, which takes place in Amsterdam shortly after Frank Schoeller’s funeral. Alec and his friends realize that they, too, may be targets for murder and become frantic in their attempts to understand what is going on. Has Frank lead a secret life? Was he involved in some illegal financial scheming?

As the three friends follow the trail, simultaneously learning about the historical Dutch obsession with tulips and discovering that the craze wasn’t all about tulip bulbs and greed, they eventually realize that Frank’s pursuit wasn’t really about tulips, either, but rather the development of scientific research and the fostering of freedom of thought and Christian humanism that would bring about world peace without war.

That same movement of humanism had enemies in the seventeenth century as it has in the present. Frank and his group had wanted a precious tulip bulb to clone as a means of making money to foster their causes of free will, freedom of religion, and science. Their enemies want the bulb to fill their coffers in an attempt to become wealthy, powerful, and renowned for resurrecting what was once considered the most beautiful tulip in history, “Semper Augustus.” Ironically, the tulip’s beauty was caused by a disease that would eventually lead to its extinction. Now, in the 21st century, a metaphorical virus has raised its ugly head in the distortion of the pursuit of this surviving tulip bulb that has been kept hidden for centuries. Where is this elusive bulb? Who finds it first? Keep reading!

Danielle Hermans has managed to write a wonderfully structured novel based on meticulous research and an imaginative theme. At the same time, she’s avoided a common pitfall of authors who may tend to become wordy and pontifical in narratives that reveal copious historical information. This very satisfying historical mystery lays the groundwork for what may become a shibboleth for this author.