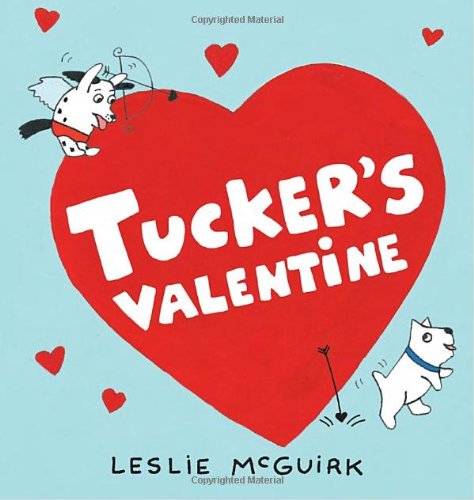 It’s Valentine’s Day and time for Tucker, the pooch, to learn about love from his owner.

Tucker considers all the things he loves, such as his food, toys, and sleeping on the couch. He also learns that Cupid flies around on Valentine’s Day shooting his arrows and whoever is pierced will fall in love.

Cupid wants to shoot his arrow at Tucker so he will fall in love with another dog, but every time he does, he misses. Not giving up easily, he looks for the right time to aim at Tucker. However, he is not the luckiest Cupid ever seen, and his arrows keep missing its mark. One day Tucker hears a noise outside and realizes it’s Cupcake, the pooch next door, so he goes out to play. Cupid decides the time is perfect to get to Tucker. Aiming at him while the two dog’s attention is on a squirrel, Cupid again misses his mark.

After all his frolicking, Tucker is tired and decides to nap. Soon after, he is refreshed and goes out to play with his friend, Spunky. With only one arrow left, Cupid is determined to hit him, but when he aims, he misses yet again.

Tucker’s owner calls him home and gives him a Valentine treat. Tucker knows she loves him as much as he loves her. What about Cupid? He never did get the chance to have his arrow hit Tucker and have him fall in love with another dog.

This board book is not only durable for those whose reading skills still involve their teeth, but also charming. It is a whimsical tale that young ones will be sure to fall in love with—even without being pierced by Cupid’s arrow.