A Truth for a Truth 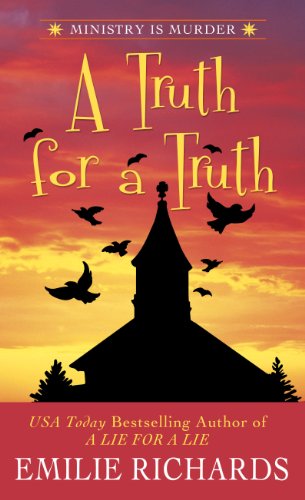 Aggie Sloan-Wilcox, wife of the minister of the Consolidated Community Church of Emerald Springs, Ohio, is at is again. Sleuthing, that is. Former beloved minister of the church, Win Godwin and his wife Hildy decide to retire in Emerald Springs. After a welcome back celebration, he is found dead, slumped over the couple’s trash barrel. Win had been in ill health so his death was considered due to natural causes. However, when an anonymous call to the police alerts them to the fact this may not be the case, Win’s burial is postponed right after the funeral services so an autopsy can be performed. All eyes and fingers point to Hildy as her husband’s murderer.

Aggie believes Hildy is innocent and she is determined to prove this fact, much her to her husband Ed’s disapproval. Though Aggie has been down this road before after accidentally stumbling across unexplained deaths, Ed realizes there is no stopping her. In addition, Hildy is concerned, feeling Aggie should be doing her duties as a “perfect minister’s wife” and not digging into the alleged murder—but Aggie is obsessed with finding out the truth about Win’s death.

Certain revelations are disclosed concerning Win, showing the man’s darker side, and adding to the congregation’s doubt of Hildy’s innocence. With the somewhat reluctant blessings of police Detective Kirkor Roussos, Aggie plunges into her own investigation, not caring she may be making enemies, or bringing danger to herself. While she searches for answers, many of the church members and close friends of the Godwins refuse to talk to her and prove to be downright nasty.

A Truth for a Truth does not disappoint with this, the fifth in the Ministry is Murder Mysteries series. This cozy reconnects the reader with well-loved characters while introducing new, clearly defined and compelling individuals. The intricate plot and subplots are sure to entice and hold the reader in suspense until the unexpected ending. The only negative aspect to this book would be the reader’s disappointment that it has ended; but it leaves us speculating about and anticipating more cozies to follow.

A capable author in various genres, Ms. Richards proves once again her talent for prose, characterization, and penning a darn good story!