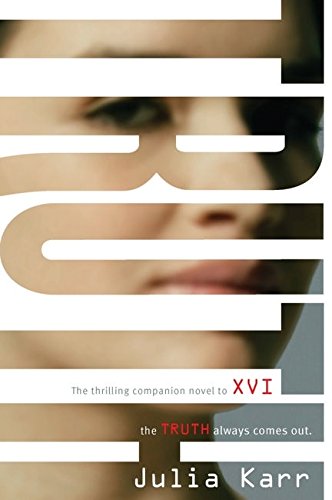 “Though Truth might lean a little heavy on the feminism at times, it also contains the heart and soul of an authentic coming-of-age story that perfectly captures the essence of first love and the confusing emotions of growing up.”

Nina Oberon has now turned dreaded 16. Adorned with the government issued XVI wrist tattoo, Nina joins the ranks of thousands of other girls who are now marked as “legal” and who, in reality, often become targets of violent sex crimes. Lucky for Nina, her recent designation as a creative will provide the opportunity to move up in social status and, as an extra perk, allow her to adorn her mark to make it more original and bearable.

But with all that Nina has to deal with right now, falling prey to sexual deviants in the least of her problems. Caught with a frequency scrambler that blocks surveillance and allows conversation to be private, Nina’s grandfather has been imprisoned for being a NonCon sympathizer. Her grandmother is near death after suffering a heart attack brought on by stress. Someone has filed a writ against the family claiming they’re unfit to be caretakers, and they’ve been evicted from their home.

Her personal life isn’t faring any better. It seems Nina’s boyfriend Sal is on NonCon missions more than he’s around. Nina loves him, but he never seems to be there when she needs him most. To make matters worse, when he is around, he treats her like a helpless female who is unable to fend for herself, and in need of constant protection.

Though her best friend Wei’s family have welcomed the Oberons into their home, Nina can’t help but feel like she’s about to lose everything.

Yet Nina hasn’t forgotten where she comes from. Her mother was strong and courageous, giving her life to protect Nina and her younger sister Dee, while furthering the NonCon rebel cause that Nina’s father still leads. So when push comes to shove, the more the government tries to take from Nina, the more determined she is to fight.

Julia Karr’s sequel to XVI picks up where her debut left off. Fans of the first book will find themselves immersed once again in the iron-fisted spectacle that is Ms. Karr’s futuristic world: a world in which the blare and glare of nonstop advertisements—called verts—assault the senses 24/7; a place where 16-year-old girls are subjected to unspeakable acts and are easily identified by the tattoo on their wrists; and a venue in which the everpresent Big Brother is always watching and listening with unwavering intensity.

Ms. Karr does a good job of character development, allowing hers to evolve and mature. Nina is such a compelling and positive role model who is definitely coming into her own. Despite constantly being barraged with sexy advertising, she refuses to be the stereotypical “sex-teen” or to confirm to society’s warped ideals.

Once again Ms. Karr’s strong voice and captivating prose move the story forward in a well-paced progression that transitions her sophomore effort into the perfect position to begin its decent into the third installment.

Julia Karr does an excellent job of providing a contented sense of justice and satisfying closure of previous story lines, while opening new doors to the excitement and anticipation of unexplored adventures.

Though Truth might lean a little heavy on the feminism at times, it also contains the heart and soul of an authentic coming-of-age story that perfectly captures the essence of first love and the confusing emotions of growing up.