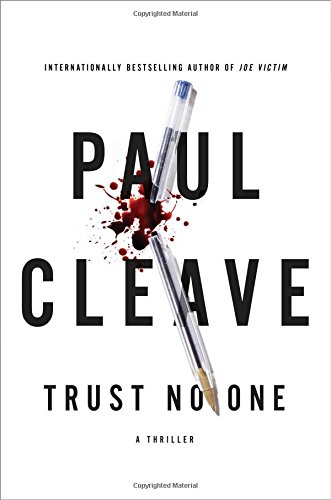 “With an unexpected ending, this thriller is one to remember.”

Paul Cleave’s novels are set in Christchurch, New Zealand. He has won the Saint-Maur book festival’s crime novel of the year in France, has been shortlisted for the Ned Kelly Award, the Edgar Award, the Barry Award, and has won the Ngaio Marsh Award for NZ crime fiction.

Trust No One is a sometimes-disturbing account of novelist Jerry Grey who has been diagnosed with early onset Alzheimer’s Disease at the young age of 49. Writing under the pseudonym Henry Cutter, Jerry has a huge following of readers who thrive on his 12 books that feature brutal killers and sadistic acts of cruelty and torture.

As one might expect, the unforgiving disease begins to cause aberrations in Jerry’s behavior and psyche. He begins to confuse reality with his stories and characters, and vacillates between being Jerry, the husband and father, and Henry Cutter, novelist.

Eventually, Jerry is confined to a nursing home where he begins to confess to an assortment of murders. The staff chalk it up to their resident’s dementia; however, after certain similarities between Jerry’s book murders and actual events begin to appear, the police interject themselves.

Jerry’s best friend, Hans, is a diabolical character who plays a pivotal role in the story. He seems to both encourage and assist Jerry in attempting to prove his innocence, yet his actions belie that behavior.

The storytelling in this book is somewhat unique in that the author tells it from Jerry’s perspective, and his alter ego, Henry Cutter. He refers to “future Jerry,” and “past Jerry,” while he writes and reads from a journal he keeps as his memory deteriorates.

As Jerry’s disease progresses, he can no longer be sure if he actually committed any crimes or if the murders were committed by the characters in his books. Reality becomes blurred and as the police begin to move in Jerry is in a desperate race to prove his innocence.

Trust No One is a tense read with many surprises. The protagonist is complex and interesting, and although he seems evil at times, readers will ultimately be on his side. With an unexpected ending, this thriller is one to remember.