Trust Me When I Lie 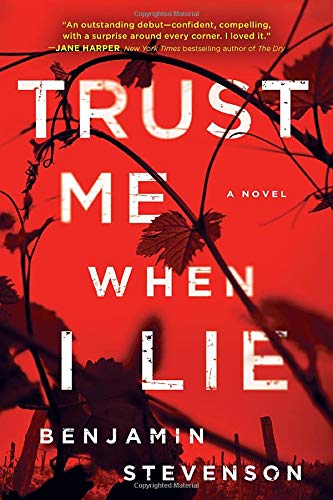 “Trust Me When I Lie is more than a mystery, although it is a good one; it is also a portrait of a man caught in his most stressful moment when he must confront the lie that forms his character.”

While fans are familiar with mysteries from America, the UK, Canada, and Scandinavia, few may be aware that Australia is also a player in the mystery thriller stakes. Benjamin Stevenson’s debut novel Trust Me When I Lie rivals anything published in countries better known for complex and compelling mysteries.

Jack Quick is a producer of true crime documentaries, and his current project has all of Australia riveted to their televisions. Jack frames a narrative around Curtis Wade, convicted of the murder of Eliza Dacey, whose body was discovered in Wade’s vineyard four years previously.

“That was where Eliza had been found. Four years ago. Strangled. Two fingers cut off and shoved in her mouth. Naked. Barefoot.”

A dead girl, a dead naked girl, a man already convicted and in prison for four years, might seem worth a single episode on some true crime series, but it depends on how you frame the narrative, and Jack is a master at that.

“The evidence around Curtis Wade had been circumstantial at best—there was no blood; there was no murder weapon.”

The investigation was sloppy, and Sergeant Andrew Freeman, cop and owner of a local vineyard, arrested Wade Curtis that same night, even though there was no proof whether Eliza was killed where she was found, or whether she was dumped.

Curtis Wade is unpopular in the local community and there is reason to believe that the jury is biased. Much is made of Eliza’s footprints found at the scene, but there is no way to prove they are even her footprints because she wasn’t wearing shoes, and none were ever found.

The final episode in a true crime documentary ideally will identify the murderer, but Jack can’t do that. Thanks to the publicity his documentary has generated, and public sentiment that Curtis Wade was convicted on bias rather than evidence, a new trial is the best Jack can hope for.

Then, while screening a film made at the crime scene for the documentary, Jack sees something he wishes he hadn’t. A furtive search of the vineyard near where Eliza’s body was found turns up a moldy, dirt-encrusted pink tennis shoe. One of Eliza’s missing shoes.

“He had a decision to make now. The difference between success, fame, a legacy, and fading away like he always had. This would ruin everything he’d worked for. He knew what he wanted to do. He also knew what he should do. Those feelings were not the same.”

Instead of turning the shoe over to the police, Jack hides it in his closet. “. . . if Curtis was innocent, then introducing such visually damning evidence would do him a disservice.” On the other hand, if “Curtis had killed Eliza—and someone certainly had—then the killer was already in jail. No new evidence needed. Justice served.”

Jack has framed a narrative that Curtis Wade was unjustly convicted when the truth is “Jack didn’t know what he believed anymore. And he couldn’t decide what was worse: that he’d disappointed an innocent man or that he might have fired up a murderous one.”

Guilt-stricken and fighting the bulimia that has affected him most of his life, Jack meets with Curtis Wade’s defense attorney, Alexis White, who admits she hasn’t figured out whether Curtis is guilty or innocent.

“That’s the strategy: not really whether he did it or not but whether they were able to prove it.”

Alexis also tells Jack that what he is feeling is grief that he isn’t as good a man as he thinks he is. Jack agrees with her, but also knows that he is part of the story now, not just a TV producer that framed a narrative. If a new trial frees Wade Curtis, Jack is at least partially responsible.

After a new trial does indeed free Curtis Wade, and shortly afterward his attorney Alexis is murdered the same way as Eliza, Jack decides to return to Birravale, the tiny town close to Wade’s vineyard and basically reinvestigate the crime.

Jack knows the only way to free Lauren from the trap she is in is “to get the truth out there.”

Jack is now convinced that Curtis Wade is guilty, but he is no detective to prove it. He’s a TV producer used to framing the narrative to tell a story. The story he told is false, and he ruined people’s lives by the way he described them in his documentary.

Jack described the prosecutor, Ted Piper, as a grease ball determined to send an innocent man to prison with little or no evidence. The cops who investigated the murder Jack portrayed as incompetent and biased.

Stevenson is a master of deception. Whatever scenario the reader believes is turned on its head in the next chapter. Every character lies or at best omits part of the truth. Much as Jack does for his documentary, Stevenson frames the narrative in such a way that one is convinced of one truth when the opposite may be true.

The setting is illustrative of the plot: mist and fog obscure the landscape much as the narrative obscures reality. Stevenson saves some of his most eloquent language to descript the setting.

The character of Jack Quick is one of the most conflicted and complex of any recent protagonist. His struggle with bulimia is synonymous with his struggle with controlling himself and his environment.

As likeable as Jack is and as much as one sympathizes with him, his conflicts with what is right and what is not will make one occasionally uncomfortable with his decisions.

Stevenson sometimes uses flashbacks in an unconventional way that momentarily confuses the reader. Jack will suddenly flashback in the middle of a scene. While disconcerting, these flashbacks are also compelling by providing context to Jack’s life.

Trust Me When I Lie is more than a mystery, although it is a good one; it is also a portrait of a man caught in his most stressful moment when he must confront the lie that forms his character.

A truly magnificent story on so many different levels, Trust Me When I Lie should be at the top of everyone’s must-read list.