Trumpty Dumpty Wanted a Crown: Verses for a Despotic Age 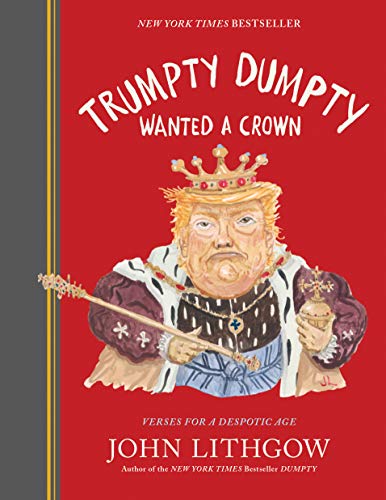 “This is a very fast read, regardless of how one feels about the current administration.”

John Lithgow’s most recent work of art, Trumpty Dumpty Wanted a Crown follows closely on the heels of his first political satire, Dumpty. Here he delves deeper into the Trump administration, selecting new minions for his take on current events.

As Dumpty got some vitriolic responses from Trump supporters, it is a safe bet that Trumpty Dumpty will experience the same one-star responses across the publishing universe. It is also safe to say that the five-star reviews will appear in abundance.

As with the last endeavor, no one in the current administration is safe, and depending on which side of the road one travels, the poems are either hysterical or awful.

As with the last book, Lithgow presents each poem and follows it up with a short paragraph explaining what individual, event, or activity likely brought his creative bent to the fore. It is hard to imagine that anyone reading these poems would need that extra information, but it’s good to have it as a reminder.

Lithgow begins the book with a short introduction, “Just Yesterday,” wherein he provides the reader with insight into how his poems sprang from an event in June 2020 when the president appeared at St. John’s Church across from Lafayette Square in Washington DC. As with the prior book, it is difficult to pick a favorite, but Lithgow himself sums up his efforts with:

“As you read the following poems, you’ll come across one of my favorites. It’s called “Fake News.” It concludes with the following couplet, in the voice of our president himself:

These poems are my modest attempt to make sure that doesn’t happen.”

While many, if not most, of the poems shred those in or around the administration, specific activities do not escape Lithgow’s acerbic pen, including:

On a jaunt at Trump Turnberry;

Heads of state at Trump DC

Buying off the franchisee;

This is a very fast read, regardless of how one feels about the current administration, and Lithgow’s concise paragraph explanation helps the reader understand how the poem formed.