The Trump Survival Guide: Everything You Need to Know About Living Through What You Hoped Would Never Happen 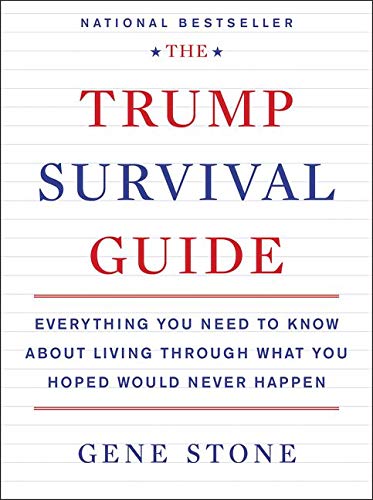 This is a handy little book for anybody interested in political activism, and perhaps even essential for someone trying alone to navigate the endless corridors of federal bureaucracy. Too bad the book will put off (or p.o.) nearly half its prospective readers by presenting itself as a “go-to guide for those who wish to understand—and to stop—Trump’s policies.”

The publisher, who makes no bones about the book’s aim, timed its release (ten days before the inauguration) as a shot across the bow of the approaching Trump Administration. In a letter to “Dear Colleague” about the book, its publicist Maureen Cole throws down the gauntlet:

“While marches and social media are important forms of protest, concrete actions achieve real change. Positive and reinforcing, The Trump Survival Guide presents the essential information we need to effectively make our voices heard and our power felt.”

Okay, so it’s not Chairman Mao’s Little Red Book or even Thomas Paine’s call to revolutionary arms. Still, the reader might well ask, What power? And for what? The election’s over. Trump won. And he did not win by embracing the liberal views championed in this book. Just the opposite! And guess what: All the agencies and tools and strategies listed in this book were in place before the election. So what good are they now? The nation’s electoral process has spoken. Dogs bark and the caravan moves on.

The prospective reader would be ill advised to construe this POV as an endorsement of anything except democracy and maybe growing up. Sometimes your team loses. Ask the Thomas Dewey supporters of 1948 about a loss even more shocking than Hillary Clinton’s in the recent election. Did anybody rush into print with an anti-Truman handbook? Don’t think so. (And just to balance the scales a bit: How red would their faces be now?)

There’s nothing new in losing what you thought you would win. Didn’t Al Gore win the popular vote in 2000 while losing the presidency to George W. Bush? For those whose memory might be hazy on that subject, heed the words of former Yankees manager Casey Stengel, a man thoroughly familiar with both winning and losing: “You could look it up.”

But to give the book its due, The Trump Survival Guide is worth every dime of its price. It is chock full of reference material and addresses not easily found, including website addresses that only a Googlemeister could turn up.

As Cole points out in her publicity letter: “Stone outlines political and social concepts—including civil rights, women’s issues, education, voting rights, the environment, Obamacare, LGBTQ rights, national security, and political issues . . . , then refers readers to specific organizations, websites, books, and countless resources that readers can use to support” their goals.

If right off the top you might have added: mental health, Middle East Crisis, jobs, crime, inflation . . .

No matter. The Trump Survival Guide is a very useful handbook no matter which way you voted or whose side won.