The True German: The Diary of a World War II Military Judge 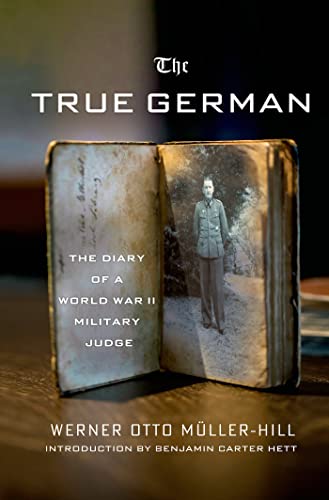 Werner Otto Mueller-Hill served Germany during both the First and Second World War, on both occasions as an Army Military Judge. In 1944 his unit, 158th Reserve Division, was stationed in Alsace-Lorraine (Lothringen in German). Mueller-Hill was a native of Lothringen, and his billet in 1944 was in Strasbourg, an old and beautiful city and a cultural center of western Germany.

On or about March 28, 1944 Mueller-Hill began to keep a personal diary, an act which if not actually criminal on its face had the potential for subjecting the diary’s author to the unwanted attention of the Gestapo if discovered. In spite of the diary’s inherent potential to create mischief for him, Mueller-Hill continued to make entries in it until June 7, 1945, a month following Germany’s surrender.

In his diary, Mueller-Hill failed to accord Adolf Hitler and the Nazi party the level of respect, honor, and gullibility demanded of any citizen of the Third Reich. And he openly expressed the view that Germany was on the verge of losing the Second World War. Mueller-Hill knew well that should his diary fall into the wrong hands his own chances of surviving the war would diminish precipitously.

The Mueller-Hill Diary is, if nothing else, mundane. Its entries generally deal with a short list of topics, among which the most persistent is the past, present, and future course of the war. This is the common thread that ties the diary together.  It weaves its way through the text, at some points appearing almost daily.

Another persistent theme in the Mueller-Hill Diary is the author’s contempt for the callous perfidy of the Nazi party and the Fuehrer in their death throes. The author’s complaints in this area arise from the steady diet of claptrap being fed to Germans by the Nazi regime via a number of sources, including radio broadcasts, the party-controlled press, and imperial edicts, as well as orders issued and speeches given by National Socialist guidance officers (Natzionalsozialistische Fuehrungsoffiziere) assigned to nearly every unit in the German Army following the attempt on Hitler’s life of July 20, 1944. The general tenor of this “information” was that despite the evidence of their senses, Germans must have faith that victory and retribution were both at hand.

From a literary point of view, the Mueller-Hill diary is just that: a personal record. In spite of the nearly universal cynicism that infects modern society and culture, it is possible for someone to write a diary that is not self-exonerating, self-serving, self-aggrandizing, or filled with lies. Werner Otto Mueller-Hill’s diary is that diary.

This diarist was concerned with the here and now. He did not have in mind the question of how historians would interpret what he said, place it in its proper historical context, judge it against the work of other contemporary diarists. More than likely, he sought to have a means for remembering what his former life was like and to teach his children and grandchildren who their Papa and Opa was.

And this is where the diary and the diarist, speaking to us from the Germany of the 1940s, diverge from the historian and historical analysis, speaking to us from a Germany and a world 70 years on. The historian in this case is Benjamin Carter Hett, currently Professor of History at Hunter College and the Graduate Center, CUNY, and author of the Introduction to the diarist’s work. Hett’s scholarship, based solely upon my own reading of his excellent Burning the Reichstag, as well as his literary skills, are of the very highest order.

Nevertheless, Professor Hett’s Introduction is not sacrosanct or beyond reproach. The principal issue here is that the Introduction is rife with the de rigueur criticisms directed at Germans who were adults in wartime Germany. And it is worth bearing in mind, when considering these criticisms, that with very few exceptions, many were first made and all have been perpetuated by people without the firsthand experience of living in a police state such as the Third Reich.

Here we have, for example, Professor Hett’s condemnation of “Nazi” military jurists for their collective and extraordinary harshness to their own troops and others in condemning 20,000 to 33,000 (numbers often doubled by other supposed experts on the issue) “soldiers, prisoners of war, and civilians subject to military justice” to death, and for drafting the Commissar Order calling for mass shootings behind the lines “which historians recognize as a major step on the path to the Holocaust.”

Professor Hett would be remiss, of course, if he did not address that progenitor of all of the other hackneyed inquiries into the dark souls of German survivors of the Second World War (and as other historians would have it, the dark souls of the children, grandchildren, and further descendants of such persons, ad infinitum), namely “what Germans in the Third Reich knew and when they knew it.” The “what” and the “when” in that sentence refer to the complicity of Germans in the Holocaust.

The litany of crimes and other injustices committed or ratified by ordinary Germans during the Second World War and illuminated by Professor Hett in his Introduction to Herr Mueller-Hill’s diary is too long to be considered here. The Nazi regime “enjoyed genuine, strong, and unforced support from a majority” of its citizens; ordinary Germans were compliant with and nonresistant to “the regime’s worst crimes.” And, as if there were any doubt about it, Germans knew about the Holocaust. And to have known about the Holocaust is to have endorsed the Holocaust, to have exulted in it, to have enabled it, to have pulled the trigger or opened the gas valve to make it happen.

There is one last bit of Professor Hett’s “analysis” of the Mueller-Hill diary that should be highlighted. In the Introduction Hett embraces the view of historian Wolfram Wette who has written that Mueller-Hill wrote his diary because “he wanted to create a document for his own exculpation after a clearly foreseeable Allied victory.”

He (Jesus) also told this parable to some who trusted in themselves that they were righteous, and treated others with contempt: “Two men went up into the temple to pray, one a Pharisee and the other a tax collector. The Pharisee, standing by himself, prayed thus: ‘God, I thank you that I am not like other men, extortioners, unjust, adulterers, or even like this tax collector. I fast twice a week; I give tithes of all that I get.’ But the tax collector, standing far off, would not even lift up his eyes to heaven, but beat his breast, saying, ‘God, be merciful to me, a sinner!’”