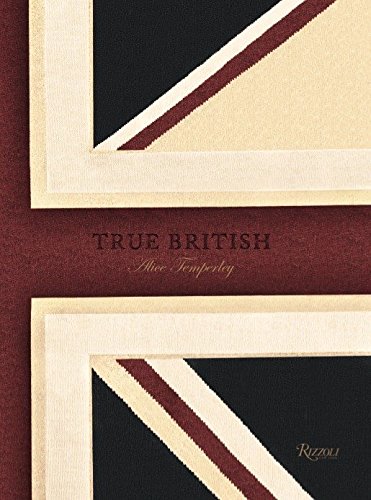 “Alice Temperley is ‘true British’ in the sense that she follows in the footsteps of many great original English designers who forged their own paths and made a lasting impact on the fashion industry.”

Ms. Temperley has presented a written and visual true-life fairy tale that just so happens to be her life story. True British is an absolutely glorious chronicle of Ms. Temperley’s personal, professional, and private lives. There are exquisite photographs from each collection spanning her 10 years in business—testaments to the true talents of this designer.

Almost from the very beginning of her career, Alice Temperley knew the meaning of success. With her steely determination and a support system that one can only fantasize about, she was able to make her life what it has become. It should be noted that the love of her life turned out to be not only that but the one person who pushed her, with all his heart and resources, to become a world class designer.

I actually learned something from this book—a rare occurrence when it comes to any glossy fashion title. What is to be learned here is that with grit and force of will and great talent, a “fashionable” life can turn into a life of dreams made real. Her body of work is impressive when measured against any designer in her area of expertise, and yet with all her unique “inspirations”—which can just as often spell disaster as easily as they can avante garde—she has remained on top of her game.

A parting thought keeps ringing in my head: Ms. Temperley verbally stated that she had no desire to be fashionable and just wanted to create beautiful clothes for herself and her friends. One can almost guarantee that words like these have never issued forth from the lips of most of her contemporaries.

Alice Temperley is “true British” in the sense that she follows in the footsteps of many great original English designers who forged their own paths and made a lasting impact on the fashion industry.