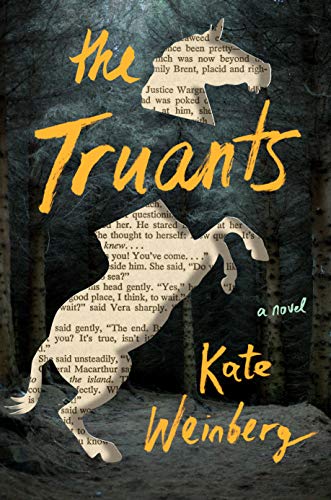 The set-up for The Truants is enticing.

A wide-eyed female university freshman yearns to be a pupil of the inscrutable professor Dr. Lorna Clay, who teaches at the University of East Anglia, on the outer fringes of academia. “Not a backwater, exactly, but Norfolk nevertheless.”

Jess Walker is eager to take Dr. Clay’s course “The Devil Has The Best Lines.” She is so eager to study under Dr. Clay that Jess Walker has completed all the advance reading list, a “full immersion in the gin-soaked minds of Hunter S. Thompson, Zelda Fitzgerald, and John Cheever.”

Dr. Clay is the author of The Truants, a book of literary criticism that advocates the idea that writers need to break the rules in order to be brilliant. In fact, the best writers don’t merely break the rules, they destroy their personal lives in sacrifice to their art. Dr. Clay believes that “most of the magic in life happens just outside the lines.”

“Literary criticism—when the hell did that change anyone’s life, for God’s sake?” Walker tells us. “Except it did, mine. And I knew it would, almost from the first paragraph, because Lorna’s voiced pulled me in and down, like a riptide carrying you underwater and far out to sea so that when, about page five, I flipped to the author picture on the back and saw her clever, beautiful face and read the sentence about where the taught, I thought: Here she is at last. The person who will take me out of this small, airless world before the banality chokes me.”

But Walker is left out of “The Devil Has the Best Lines” and instead is enrolled in another Dr. Clay class focused on the works and life of Agatha Christie. The new one is called “Murdered by the Campus.” Dr. Clay believes Dame Agatha is underappreciated. Dr. Clay is fascinated, also, by the 11 days when the real-life mystery writer went missing in 1926.

So Jess Walker dives into university life and quickly finds herself in a complex swirl of relationships. Georgie, a fun-loving socialite, who is with Alec, a white South African journalist. Alec is on a fellowship and happens to drive a hearse. And geology student Nick, who falls for Jess Walker even as Walker longs more and more for Alec.

Much of the middle chunk of The Truants is absorbed with Walker’s extreme longing for Alec. Parts read like straight romance. “Then I would allow myself to replay the moments when our eyes had met over the heads of our lovers. The tiny hesitations in his voice, which I had filled with romantic subtexts, the brief moments of casual intimacy, little kindnesses when he’d picked up my phone or passed me his coat, as if we were together, he and I, and Georgie and Nick didn’t exist.”

For much of The Truants, unfortunately, Dr. Clay also disappears. So does any in-depth discussion of Agatha Christie and her works. Alec heads back home to South Africa. Alec’s plans for returning are unclear. His absence causes no amount of anguish for Walker. A “tragedy,” as the book jacket copy informs us, shatters the “fraught foursome.”

When Dr. Clay circles back around in the story, Walker’s relationship with her mentor suddenly becomes intense. Soon, there’s an invitation for Walker to follow Dr. Clay to an Italian island for a getaway.

Unfortunately, the novel’s drive falters as Jess Walker waits for the needs and desires of those around her. After working so hard to grab Dr. Clay’s attention at the outset, Walker doesn’t do much except let the plot to buffet her around.

Having read and been inspired by a work of literary criticism (certainly a rare teenager!) one might think Walker would show up at the University of East Anglia with keen insights into character, with her radar on high alert. But it’s not until late in the book that Georgie needs to caution dewy-eyed Walker about Lorna Clay’s true character. “She claims to be after some poetic path to self-discovery, but . . . Lorna Clay is the biggest player of all,” says Georgie. This might be news to Walker, but it should not come as news to readers.

The ending of The Truants suggests moments of tension worthy of Patricia Highsmith, but they are often lost in unnecessary self-reflection about Walker’s feelings and what she’s learned. “Lorna had been a doorway into another world,” Walker tell us. “Alec had, as well. I had followed them, crossing lines, and the world had flared with color.”

The Truants’ rich world and lofty ideas are too often accompanied by such emotional hand-holding and by writing and characters who are drawn decidedly within the lines.