Troubled Water: What's Wrong with What We Drink 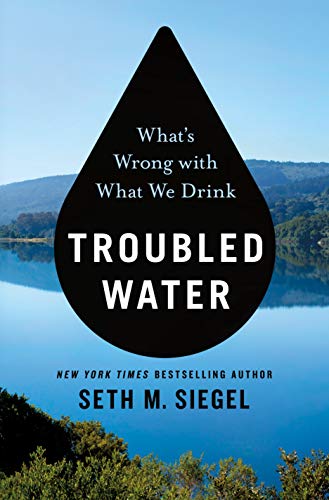 “This book is highly recommended for anyone who wants to be more informed about issues related to our water supply, steps being taken to improve the situation, and ideas for the future.”

In Troubled Water, Seth M. Siegel, a lawyer, activist, and author, uses his expertise to discuss the state of drinking water in the United States. Siegel reviews many reasons why our drinking water is contaminated, problems associated with this contamination, and steps we can take to improve the existing situation.

Siegel discusses how chemicals found in drinking water have been associated with many health issues, including cancer, cardiovascular disease, and hormonal disruptions, among many others.

To date, governmental agencies, such as the Environmental Protection Agency (EPA) have not done enough to research contaminants in our water. Siegel points out that the EPA moves slowly and has not regulated any new drinking water contaminants in over 20 years. One dangerous contaminant that continues to go unregulated is perchlorate, a manufactured chemical commonly used in rocket fuel. He also provides many examples of how the EPA’s Safe Drinking Water Act has done little to protect us from contaminated drinking water.

Another issue plaguing our nation’s drinking water supply is prescription pills.  Leftover pills are often flushed down the toilet, and their residues travel to local wastewater treatment plants.  These remains are discharged to waterways and often end up in people’s tap water. This phenomenon is particularly problematic near hospitals and nursing homes, as many pharmaceutical agents are flushed down the toilet in these facilities. Unfortunately, the EPA does not regulate levels of pharmaceuticals in drinking water.

Although most people are familiar with Flint, Michigan, Troubled Water contains stories and interviews from both experts and victims about contaminated water throughout the United States. Siegel provides an example of a son whose father died from kidney cancer in Hoosick Falls, New York. Hoosick Falls has a history of producing Teflon pots, which are made from perfluorooctanoic acid (PFOA), a known carcinogen. The residents of Hoosick Falls have higher rates of many illnesses, likely due to their exposure to PFOA.

This story is all too true in many towns across the United States. Contaminated water can often be caused by chemicals getting into the groundway. The groundwater, which provides water for wells and supplies drinking water for people’s homes, allows contaminants to come in through faucets.

He also provides a promising example of how the Orange County Water District (OCWD) in California is filtering their drinking water. This system provides pure water to its residents. Unfortunately, it also uses a lot of energy and can be costly, so it is not feasible to adopt this solution everywhere.

Siegel offers other suggestions to improve our nation’s drinking water crisis. Ideas include consolidating water utilities, moving drinking water out the EPA, and creating a well-funded independent drinking water improvement fund. While these are good ideas, many of these suggestions do not seem realistic, primarily due to their excessive costs. However, these ideas do get an important conversation going about a crisis that affects all of us.

Francesca Spina PhD is a professor teaching criminal justice at Springfield College. One of her research interests is environmental justice, especially in regards to the equal enforcement of environmental policies.