Trouble’s on the Menu 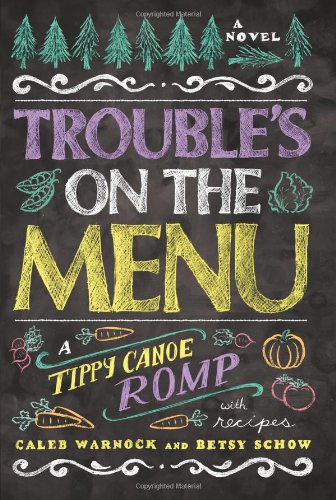 “The authors do a good job of evoking a sense of place and a life’s pace, but could have taken a page from the books of their predecessors on this road by creating memorable, believable characters.”

When Malibu artist Hallie Stone arrives in the sleepy town of Tippy Canoe, Montana, she has no intention of staying any longer than the amount of time it takes to settle the estate of her long-estranged husband.

A late night car accident sets her on another path, however, and soon she is reluctantly embroiled in the small-town woes of her new “hometown:” the blustering governor wants to close the town’s vaunted Pioneer schoolhouse; attendance at the town’s one tourist attraction is waning; the economy is causing folks to move on, leaving empty homes and storefronts as thick as the trees that surround the town.

Most importantly, the town’s Christmas tree farm has been vandalized, leaving the mayor, his sheriff’s deputy father, and his lawyer/restaurateur/geothermal farmer grandparents unable to pay off the tax lien on their family property.

Hallie pitches in with a will, helping find solutions to these problems and more, and along the way finds herself falling for kindhearted widower, Mayor Greathouse. She becomes a valued and respected member of the community in less time than it takes to relate all of her goodness here. When trouble threatens, Hallie must decide whether she’s a Tippy Canoe resident or an outsider.

In Trouble’s on the Menu, Caleb Warnock and Betsy Schow have attempted to expose a good-hearted, if uneven slice of small-town Western life. The portions in Hallie’s voice are by far the most realistic and affecting scenes.

Ms. Schow captures the cadences of small-town Western speech and manners in a way that will ring true to anyone who has lived in that area. Her female characters are funny and feisty, the backbone of their community.

Less effective are the portions from the male perspective, particularly the character Flash. His dialogue, mannerisms, and narrative voice are drawn crudely, making him more a caricature of a bad guy than a true character. The letter that he sends to discredit several other characters is so over the top that it’s pretty hilarious (unintentionally, I’m afraid).

Descriptions of food are drawn out far too long and distract from the story, slowing down movement that is already fairly glacial until the last few scenes. The addition of a gun battle and a fire felt unnecessary and a bit melodramatic.

Ms. Schow and Mr. Warnock were clearly aiming at territory already comfortably explored by Jan Karon and Fannie Flagg: small-town life as microcosm of all that is good.

The authors do a good job of evoking a sense of place and a life’s pace, but could have taken a page from the books of their predecessors on this road by creating memorable, believable characters.

Still, for a first effort it was fairly charming.