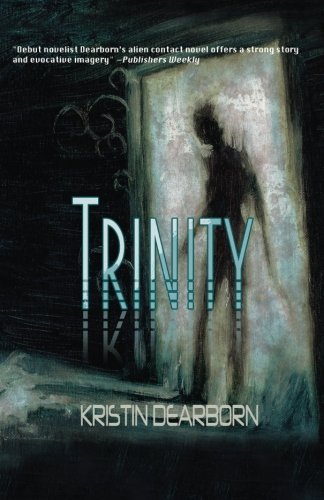 Stop me if you’ve heard this one before: Aliens with big heads and huge eyes are roaming the New Mexico desert and have abducted people to snatch their babies. While the theme is familiar territory for science fiction fans, Kristin Dearborn’s Trinity is nonetheless an engaging romp with knuckle-busting fights and vicious monsters—human and otherwise.

The trinity in this case refers not to a religious symbol, but to a man. Our maligned hero Valentine Slade is the connection between humans and two warring alien races. The body-snatching worms can’t wait to burrow into his skull and tap his body’s untapped powers while the little gray men with super telekinetic powers oppose them with their mysterious motives. Meanwhile, a beast with huge claws sees fit to disembowel anyone who messes with Val.

The problem is, Val didn’t ask to be chosen. Just out of prison on a bad rap, Val just wants to reconnect with his girlfriend, the feisty Kate Fulton. Her brother is more than a little jealous, given the shotgun he shoves in Val’s mouth as a “welcome home” present. It’s pretty much Val and Kate against the world, both Earth and visitors from a couple other planets.

Then there’s Val’s mother, who her son visits in the hospice in an emotionally gripping scene. It turns out the stories she’s been spouting for years about being abducted by aliens weren’t delusions.

There is plenty of tension when the main characters are repeatedly placed in danger. The major theme for the characters is fighting back against the people, or aliens, who bullied them, so it feels good to root for Val and Kate when they punch back.

There are times when our heroes have unusual lapses in judgment, though. If visiting an old abandoned mine gave you a nosebleed and headache that nearly killed you, would you return the next day? Knowing the kinds of monsters that are out there, wouldn’t you keep a gun near you at all times instead of hiding it away?

Ultimately, the novel succeeds in making us care about the fate of Val and Kate: not just their survival, but whether they’ll have that romantic getaway those pesky aliens and her two-bit brother keep denying them. Val must decide whether it’s worth it to stick around Earth where his love is in constant danger or to leave with one of the alien races.

Ms. Dearborn provides a larger-than-life ending that suggests the story will continue. And well it should.

Brian Bandell is the author of the science fiction thriller Mute and a thriller, Famous After Death. He is also a journalist at the South Florida Business Journal, where he has won more than 20 awards for his writing.