The Trick: A Novel 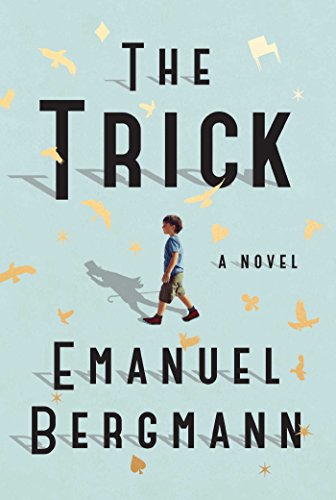 In the early part of the last century, a young Jewish boy named Moshe Goldenhirsch lives in Prague in a building with his mother, her husband, who may possibly be his father, and a locksmith, who probably is. From his father, Moshe gets his education; from the locksmith, he learns how to open any lock.  When Moshe is in his teens, the circus comes to town.

“It was the most beautiful thing he had ever seen. He felt as if he was lifted up by an unseen wave. He was in love, with the scent of the theater, the sawdust, the wood, the dirt . . . the glare of the floodlights, the applause of the audience, but most important of all, he was in love . . .” with Julia, the magician’s assistant.

He runs away to follow the circus and Julia, hoping for the day when he, too, can wield magic and amaze the masses. To escape the magician’s jealousy, Julia and Moshe go to Berlin. With forged papers, Moshe becomes the Great Zabbatini, a mentalist.

“Within a few months, the Great Zabbatini was what the locals called ‘world-famous in Berlin.’ He managed to fill the Wintergarten’s auditorium twice daily . . . He opened a private parlor in Uhlandstrasse, unfaithful wives, bankers with gambling problems, healthy hypochondriacs—they all wanted his advice.”

He even meets Adolf Hitler.

The magician reappears, denouncing Julia and Moshe to the Gestapo. Moshe is arrested and sent to a concentration camp.

Moshe survives the camps. He travels to the U.S. and becomes a well-known entertainer, then a not-so-well-known one. Now he’s merely an old man with no dreams. Disillusioned, he’s simply waiting to die, and then he meets a young boy named Max Cohn.

Max’s parents are divorcing.  All he wants is for his family to be together again. When he discovers a recording The Great Zabbatini made in which he mentions a magic trick guaranteeing eternal love, Max wants to believe.  He seeks out the old man and asks him to perform the spell on his parents.

“His plan was as simple as it was daring. He had to find Zabbatini, no matter what.”

Moshe knows there’s no such spell. That was simply fanfare for his audience. But if it gets him back into show business for even a few hours, what can he lose? He agrees to perform at Max’s birthday party.

“‘You want me to perform love magic, no?  To make your parents fall into the love.’
‘But you said there is no magic.’
He did. That had been perhaps a mistake. Zabbatini conjured up a charming smile.  ‘If you will it, it is not a dream.’”

Once more amid the glitter and glitz of his magical paraphernalia, the old man performs his famous “trick.” In doing so, he discovers a link from his past connecting him to Max’s future, and realizes that magic does exist—if one believes—and sometimes, miracles can happen.

This delightful and thought provoking story should be termed a fairy tale for adults, a fable in which the moral should be: You can never tell when what you do will eventually change someone’s world.

Moshe’s story and Max’s are told in alternating chapters, juxtaposing what happens to disillusion the young Polish boy so enamored of magic with the events in the life of the contemporary child hoping magic still exists.  Narrated in a serious, yet touchingly ironic tone, the story is couched simply as if a folktale.

Moshe starts out much as Max but is soon disillusioned by events proving to him that while he can fool a good many people with his mental quickness and slight of hand, when it comes to saving himself from the horrors of war, he, like everyone else is woefully inept. His one act of deception against his captors is committed on the spur of the moment, then forgotten, without his realizing the chain of events he’s set in motion.

Though Max’s misery is nothing compared to that Moshe suffers, his unhappiness is no less important. Max wants to believe. He wants to remain a child a little longer, convincing himself that believing, a single act of faith, one sweep of a magic wand, can erase all unpleasantness and bring his family back together.

The dialogue between the two is delightful, insightful, and, in hindsight, prophetic.

Author Bergmann has created a lovely story. Set against the backdrop of a world war without detailing the atrocities, it is touching and poignant with an ending so bittersweet, it may bring tears to the eyes of the more sensitive reader. This is a tale for those who continue to look for magic in the world, whether they find it or not.