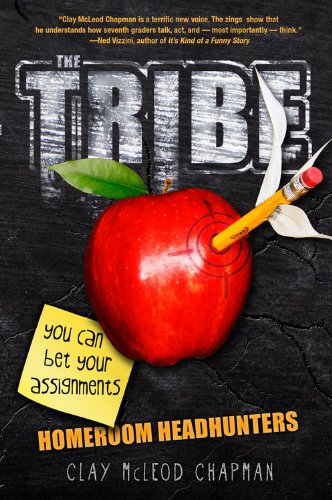 Homeroom Headhunters: The Tribe, the first book in a trilogy of children’s novels by Clay McCloud Chapman, addresses the typical middle school student’s personal struggle to fit in at school and at home.

The Tribe captures the humiliation, embarrassment, and vengeful plots of a handful of middle school students who choose a secret life of seclusion and recklessness in order to finally fit in somewhere, taking the theoretical question of whether to run away from it all or stand up, fight, and live another day—all in a literal context.

The reader sees Spencer’s first days, weeks, and months at Greenfield, which include the relentless wrath of a bully, his cronies, and his supporters. Spencer’s only friends are his trusted inhaler and his wits.

Just when the reader thinks it can’t get much worse, Spencer finds out that the school has a tribe living inside—its own secret eyes, ears, and weapons. Does Spencer join the ranks of the tribe members and leave behind the life of a bullied and unaccepted middle school student?

Readers aged 10 and up can identify with either Spencer’s plight and the plights of each tribe member, or with the middle school clique mentality.

The main character’s background is well developed, as are the backgrounds of most tribe members accomplished via cleverly written school assignments. The only part in The Tribe that feels forced and doesn’t seem to fit involves a saw and some 007-like portrayals. Though this part of the book stands out like a sore thumb, the eminent danger that’s presented in it is likely to be thrilling for middle school readers.

Quotations from classics such as Catcher in the Rye, The Call of the Wild, The Art of War, and The Red Badge of Courage provide a clever way to sprinkle in some literary genius while addressing the common subject of bullying in schools.

The quick climb from the rising action to the climax of the story suggests a more thrilling ending, but the ending is disappointing, even though it builds interest for the next book in the series.