The Trial of Lizzie Borden 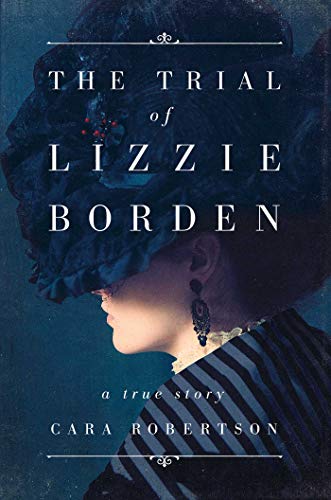 “In The Trial of Lizzie Borden, Robertson displays her writing and researching skills in this piece of creative nonfiction that reads almost as a novel. It’s hard to put the book down from the very beginning through to the end.”

And gave her mother forty whacks

When she saw what she had done

She gave her father forty-one.

A little ditty familiar to most Americans, this piece of poetry became especially popular after the scandalous events that occurred during the summer of 1892 when Andrew Borden and his wife, Abby, were horrifically murdered.

But it’s a story that has been told over and over with no surprises or new evidence. So what makes The Trial of Lizzie Borden by Cara Robertson any different from the story already familiar to most Americans?

Robertson has approached the story from a different angle. Although the first part of the book is dedicated to the murder, it is the second part of the book that is so fascinating—the trial, in all its truths and mistruths.

Reading through the recounting of the murder offers minute detail about the event and the people involved. Robertson is proven not only to be organized and thorough in her research, but skilled at depicting the individuals and locations involved giving the reader a clear picture of the events set before them. “Too old to attend one of the new women’s colleges and too wealthy for the mills, Lizzie Borden, like other middle-class women of her generation, was relegated to unproductive marginality, free to enjoy her leisure in the presumed comforts of her home.” It is this type of description that Robertson presents throughout the book that fully describes the people involved in this story.

Robertson quotes newspapers and journals to build the story and describe how the “Many . . . commentators envisaged the murderer (as) a brutish throwback, more monster than man.” And yet as evidence piled up, even though much of it was circumstantial, authorities zeroed in on Lizzie Borden as being the only possible perpetrator of the crimes—the murders of her father, Andrew, and her stepmother, Abby.

With Lizzie’s arrest, the stage is set and the focus of the book becomes the trial and its many twists and turns. Lizzie’s legal team, Melvin O. Adams, Andrew Jennings, and George Robinson (former governor of Massachusetts) was beyond reproach. The prosecution team of Hosea M. Knowlton, and William H. Moody found themselves facing extremely competent adversaries.

While the trial is covered by a multitude of reporters, Robertson uses quotations from three in particular, Joe Howard, Jr., Elizabeth Jordan, and Julian Ralph for the majority of her research. Their contributions tighten the picture of the trial.

Through much of the material used, Lizzie is presented more as a victim herself, than as a criminal. There is a definite sense that the majority of the press present was on Lizzie’s side (“Elizabeth Jordan later wrote that she and most of her fellow out-of-town reporters believed Lizzie was innocent”) and found fault with the way she was treated by the authorities. Be that as it may, there were sufficient citizens present who believed in Lizzie’s guilt.

Throughout Part Two, Robertson makes a point of showing both the gains and losses on the part of both the defense and the prosecution. She presents humor as well as empathy in her presentation through descriptions of a noisy cow and a “hoo doo” hatchet believed to be the murder weapon, and actions on the part of all the players, regardless of their role in the story.

In particular, Lizzie is described, “what was most striking was her extraordinary self-possession.” And “[she] has a remarkable temperament and her control over herself is always voluntary; seldom does she lose the strong grasp she has upon the muscles of her entire person.”

Without giving away the end, Robertson guides the reader through the maze of false starts and abrupt stops, unexpected turns, and frightening revelations.

One of the most interesting parts is at the end of the trial when each side makes its pitch to the jury—find her guilty or find her innocent. The defense does an amazing job of making its case for innocence, while the prosecution finds itself in the unhappy position of trying to make up for losses experienced during the trial.

It is during this part of the book that Robertson neatly ties up all the facts that have been laid out earlier by both sides. One comes away from the end of the trial believing in Lizzie’s innocence in spite of the circumstantial evidence put forth by the prosecution. As summed up by Robertson regarding the failure of the prosecution to prove Lizzie’s guilt, “What else but a fatal combination of over zealousness and ineptitude could explain the police’s focus on Lizzie Borden.” They needed a quick resolution to the crimes, and Lizzie was it.

In The Trial of Lizzie Borden, Robertson displays her writing and researching skills in this piece of creative nonfiction that reads almost as a novel. It’s hard to put the book down from the very beginning through to the end.