Trees: An Anthology of Writings and Paintings 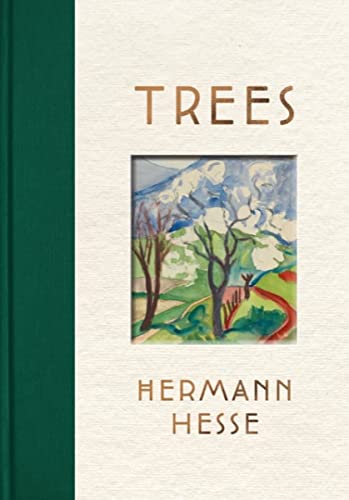 “There is a realization that comes with reading Trees: that while the collection brings with it an appreciation of Hesse’s work, each essay, each poem can be taken away and treasured for its singular value.”

Nature frequently brings out our deepest thoughts, but few can express those thoughts better than Hermann Hesse does in this anthology, Trees.

As the title of this collection indicates, Hesse focuses on trees and the effect they have on him through their beauty, their ugliness, their curative powers, their friendship.

As he explains in his first essay, “Trees, for me, have always been the most compelling preachers. I worship and adore them when they live in families and tribes, in forests and groves—and even more when they stand alone.”

But Hesse goes further, even finding beauty in their ugliness as seen in his essay “Shackled Power and Passion” where he describes his amusement at “the bold, meaningfully grotesque forms of the trunks, boughs, and roots.” Here he talks about his initial reaction as a “humorous impression . . .” but soon his vision “grows sharper and sees, without trying, whole hosts of strange forms.”

It’s difficult, almost impossible, to pick out one essay or poem and say it is the best. Each work offers insight into Hesse’s appreciation and love for nature.

In “Hermits and Warriors” he begins with “I saw meadows and slopes and earth-brown ravines covered with grasses, flowers, ferns, and mosses, to which the old local dialect had given strange and portentous names. . . . I was more deeply moved by the sight of the trees, though.” And he goes on to equate these trees to warriors and hermits as the title describes.

He ends this short essay with that comparison, “Our Men and women were like these trees: hard, severely wrinkled, and saying little—the best of them saying the least. From this I learned to look upon people as trees, or cliffs: to contemplate them, and honor them no less, love them no more, than I did the quiet pines.”

This set of selections, so carefully chosen by Volker Michels, doesn’t stop with just essays, but mixes in many of Hesse’s poems, showing the depth of his appreciation. In “My Heart Greets You” Hesse carefully expresses love from the very first words:

When I concealed my first young dreams

Of love inside your night.”

He ends this poem with:

“What I have sung since those bygone times

Was not so sweet, not so unique,

It only echoed, painfully,

The sound and light of my first love.”

But it’s not just the depth of his essays and poetry that make this such an enchanting book to read, and reread, but with each of these essays and poems is a selection of full-color, hand painted watercolor illustrations created by Hesse. Each illustration has been carefully selected to complement the item it accompanies.

Hesse also values other poets’ love of trees as shown in his handwritten copy of the poem “Trees” by Joyce Kilmer as its beginning and ending show:

“I think that I shall never see

A poem lovely as a tree.

But only God can make a tree.”

Throughout the collection, Hesse addresses not only the appearance of trees, but their curative effects as seen in his homage to “Linden Blossoms” and how in the evenings women and children climb the trees and gather the blossoms, using them for a curative tea.

Each of the works shared in this anthology addresses a different sense of life as Hesse sees them. Each is poignant in its own right, but probably the one most touching is his essay “Lament for an Old Tree” where he recounts how the many things in his life have a collective meaning of belonging, yet the most important was a tree, no longer with him, “the most beautiful tree in the garden.”

This tree drew him to his home, lived with him, and he grieved for it when it died. “But the worst, most irreparable thing for me was the destruction of the Judas tree. A younger brother will be replanted there, yes, that has already been arranged, but before its half as stately as its predecessor, I will be long gone.”

The selector of these works, Volker Michels, shares his insights into these works in an Afterword. He explains: “Hermann Hesse, once he was free to choose where he lived always lived close to nature, and he had a congenial affinity with the largest longest-living plant: trees.” True words as expressed in this anthology.

There is a realization that comes with reading Trees—that while the collection brings with it an appreciation of Hesse’s work, each essay, each poem can be taken away and treasured for its singular value.