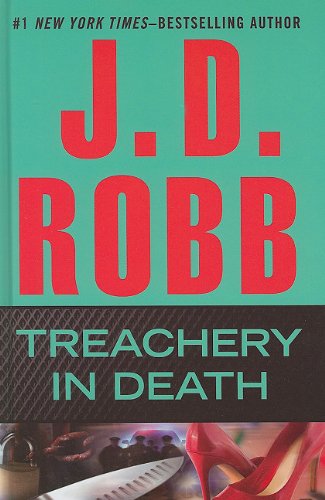 Warning: J. D. Robb’s In Death novels are highly addictive. Fortunately, Robb is the pseudonym for the famously productive Nora Roberts, and Treachery in Death is the 32nd novel in this New York Times bestselling series. It offers the same compelling ensemble of characters, breakneck pacing, and emotional intensity as the 31 previous books.

In addition, it shows us a wonderfully confident, powerful Lieutenant Eve Dallas, the central recurring character in the series. Dallas strides through this story like an avenging goddess because the culprit is the worst possible villain: a cop gone bad.

Detective Delia Peabody of the NYSPD overhears a damning conversation between two fellow police officers, who are clearly involved in a long-running criminal operation. Although Peabody cannot see them, she learns enough to take the information to Dallas, her former boss and now partner.

As Dallas and Peabody start to investigate, the scope of the problem becomes broader and deeper. They discover that honorable police officers have been killed to protect the schemes of the malefactors. Soon both Peabody and Dallas are squarely in the crosshairs of the murderers, and must protect themselves even as they deliberately push the evil cops toward desperation.

The villain, a fast-rising lieutenant in the Illegals Division, is identified almost at the beginning of the book, so the pleasure of the suspense consists of watching the detective and her team build a water-tight case against the malefactor and her henchmen. Fans of the series will be delighted to find the familiar ensemble cast of electronic wizards, former criminals, and detectives working together in Dallas and her husband Roark’s home to avoid any hint of the investigation leaking to the culprits. One of the many delights of the novel is the fast, funny by-play among Dallas’s team; there is sparkling, believable chemistry in this cast. Every character—from Peabody’s flamboyantly dressed techno-geek lover to Roark’s uptight butler with a shady past—is distinctively drawn and adds a different voice to the supporting chorus.

Of course, the most fascinating is Roark, Dallas’ multi-billionaire Irish hunk who also happens to be a former criminal mastermind. Their relationship provides tremendous emotional depth, as well as entertainment. Dallas is still learning how to be a married woman, often screwing up on niceties such as calling home when she’s working late or being gracious to unexpected dinner guests. At one point, Dallas is so tied up in meetings, she asks Roark to update her team on the progress of the case. Roark looks at her and says, “You want me to brief a room of cops? That’s appalling, Eve, on so many levels.” Yet he agrees to do it.

Two such strong and quirky personalities provide plenty of fireworks, especially because they are becoming comfortable enough in their marriage to be quite forceful in their differences of opinion. They spat just like any married couple, except exponentially more intensely. The love scenes which build out of the friction and attraction between them are passionate and steamy. Dallas and Roark are every bit as fascinating as Scarlett and Rhett.

Dallas takes this particular case very personally. Since her horrific childhood made the NYPSD the first place Dallas could call home, she is especially outraged when a fellow officer, who has sworn to defend against evil, instead uses her position to bring the worst of crimes right into police headquarters. Dallas is especially incensed when her partner Peabody is put in danger by the corrupt officer’s schemes.

The parallels between Dallas and the woman she is trying to convict allow Ms. Robb to illuminate aspects of her heroine’s professional life in unusual ways. Interestingly, in this book, the detective seems more secure that she has truly put her terrible past behind her, and faces the difficult emotional elements of the case with a new certainty in herself.

While the In Death books are set in the late 20th century and so are considered “futuristic,” the mystery is unraveled through good old-fashioned police work, not a reliance on fancy gizmos. In fact, most of the speculative elements are simply refinements on today’s technology, labeled with a slightly different vocabulary. For instance, a souped-up cell phone is referred to as a “link.” Occasionally, a police car will go vertical to hop over some traffic, and the “vids” are a fuller sensory experience than our movies; however, those who do not like science fiction should not shy away from the J. D. Robb books for that reason. These stories are based on character and plot, not fantastic machinery.

Nor should readers who have not read all 31 previous novels hesitate to plunge into Treachery in Death. Ms. Robb creates an entirely satisfying plot and character arc in each individual book, while treating the avid fan to a larger progression throughout the series. The only danger is that the new reader will become hooked to the point of starting with the first In Death novel and reading straight through the rest.

Treachery in Death is a superb addition to the already brilliant In Death series. Another warning: once you start this book, you will not be able to put it down, so plan your reading accordingly.