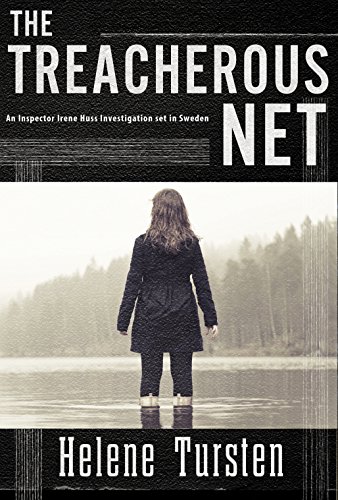 “Fans of the genre will not be disappointed by this latest Irene Huss novel.”

The snow is melting, summer is just over the metaphorical horizon, and dead bodies in Goteborg are popping up like spring flowers. First, a mutilated teenage girl, then a mummified body in a chimney, then another mutilated teen add up to a heavy workload for the Violent Crimes Unit. “So it’s only the beginning of May, and we’ve already had our murdered teenage girl of the summer. Along with another one, just to be on the safe side,” says Jonny Blom, Detective Irene Huss’s partner.

It is a bleak statement, but one with which Irene cannot disagree. Add in the city’s violent gang activity and detectives are missing sleep, meals, and family time. Irene is especially feeling the conflict between work and family. Her mother, Gerd, is elderly and unable to leave her apartment since breaking her hip. As an only child Irene has the responsibility of looking after her mother with the help of her husband, Krister, and various social service agencies. “Irene looked at her mother’s lined face. How old she looked these days! Really, really old. It had happened so fast.”

Her mother is not the only personal conflict that burdens Irene’s spirit. The other is work related: her new boss, Superintendent Efva Thylqvist. “At present Irene was the only female inspector in the department, and she suspected that this suited Elva Thylqvist perfectly.” Irene feels marginalized as the superintendent is not only not interested in her views, but so uninterested that she sends emails rather than speaking directly with her.

Determined to reclaim her position as a successful detective, Irene seizes the initiative to take nominal charge of the homicides on the two teenagers. In Irene’s opinion the cases are related. Both girls were the same age; both left their homes for a secret meeting with someone they met online; and both vanished without leaving any trace until both bodies turned up mutilated and each wearing one-half of a set of very inappropriate underwear for their ages.

In another manipulative maneuver Thylqvist assigns the case of the mummy to former Superintendent Sven Andersson, now head of the Cold Case squad. “Instead of organizing a replacement for Birgitta, she had managed to get rid of one of their most challenging homicide cases in one elegant move.” Irene isn’t pleased and neither is Sven Andersson who is smart enough to realize he has been manipulated.

The mummy is Mats Persson, murdered some 25 years before. To make the case even more interesting, Persson was shot with the same gun used to murder the mummy’s father, a state security agent, in 1941. Andersson is placed in an almost impossible position for an investigator. Most of potential witnesses from 1941 are dead, and there are no witnesses to Mats Persson’s murder. What possible motive could there be that connects the murders of father and son 24 years apart?

As Irene and Sven Andersson struggle with separate investigations, Superintendent Thylqvist finally hires another detective, Asa Nystrom, and assigns her to share Irene’s office. “You’ve got the biggest office and you’re used to sharing.” Irene is not fooled. Thylqvist wants both the female detectives together and as far away from her own office as possible.

Asa is not fooled by her new boss, and she and Irene make a formidable team. Together with the squad’s IT officer, Jens, the two women devise a plan to capture the internet killer before he can murder another teenage girl. While they are setting up the trap, Irene’s mother is in the hospital in a coma after another fall in her home. Again Irene is caught between her job and her family.

Unlike many Scandinavian mysteries, the Irene Huss series lacks the eccentric characters featured by Helene Tursten’s fellow authors. Irene is flawed and all too human, a middle-aged woman neither too attractive nor too ambitious. She only wants to do the job she loves, and if she too often sacrifices the needs of her family for her work, it is sacrifice many of her fans may make in their own lives.

The exploration of Sweden’s past actions during the Second World War mirrors in a small way Irene’s own personal conflicts. Trying to maintain its status as a neutral country during WWII, while at the same time not refusing certain requests of Hitler’s Germany in order to avoid armed conflict, was a balancing act whose consequences apparently still disturb Sweden’s collective psyche.

The Treacherous Net is a solid read for fans of Scandinavian mysteries. It is also another voice in the growing number of mystery writers warning of the dangers of unsupervised use of the Internet by vulnerable children and teens. Fans of the genre will not be disappointed by this latest Irene Huss novel.