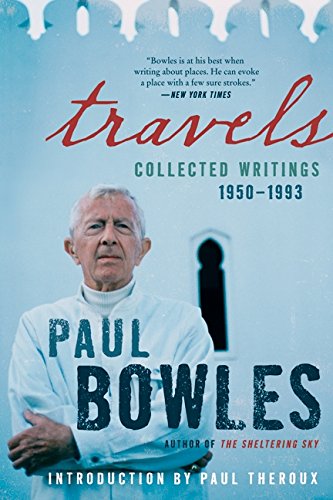 “Mr. Bowles was a composer, music ethnologist, writer, and translator. He liked to get high, to be sure, but thankfully for readers, his travel writing was more lucid than trippy.”

Paul Bowles (1910–1999) may have been a lifelong stoner, but as this nearly 500-page anthology of his collected writings proves, he was no slacker. He finished his seminal work, The Sheltering Sky, in 1948, but it was promptly rejected by Doubleday, which demanded that the modest advance he’d been given be repaid in full. The book went on to both critical and commercial success, but Mr. Bowles’ subsequent novels sold poorly.

This collection, which contains some 40 essays, travel journal entries, poems, and glossy travel magazine pieces, spans Mr. Bowles’ post-Sheltering Sky work, which was borne out of the necessity of the commercial failure of his subsequent novels.

Paul Theroux neatly summarizes the origins of the work represented in the anthology in the book’s lively introduction. “The collection demonstrates that the prudent writer, if he or she wishes to be spared the indignities of a real job, and the oppressions of a tetchy boss, has to keep writing.”

And indeed, Mr. Bowles did just that, from his base in Tangier, where he lived for the last 52 years of his life. The overarching impression one takes away from this interesting yet uneven collection is how dramatically magazine travel writing has changed over the decades. The heart of this collection is some two dozen thoughtful, lengthy travel pieces written mostly in the 50s and 60s for The Nation, the long defunct Holiday and a variety of other magazines.

Despite the quality of Mr. Bowles’ prose and his literary cache, Paul Bowles would have a hard time publishing any of these stories in today’s shiny-happy, go-there, buy this and eat that travel writing milieu. Writing in The Nation, in 1958, Mr. Bowles summarizes the ethos that pervades the collection.

“The subject matter of the best travel books is the conflict between writer and place. There is nothing I enjoy more than reading an accurate account by an intelligent writer of what happened to him away from home.”

Writing some 40 years before the release of Eat, Pray, Love, the deeply introspective travel memoir that has likely shifted the travel writing landscape for decades to come, Mr. Bowles was already lamenting the trend toward self-indulgent travel writing. Works that described a place, rather than the author, were “doomed to extinction.”

“Emphasis has shifted from the place, to the effect of the place on the person.”

He noted that trend tended to “deprive the travel writer of his natural reader.” That is, people who actually liked to travel and were curious about the world.

Pick up the glossy travel magazine of your choice today, and you cannot help but notice the sickeningly sweet gloss that is basted over destinations both toxic and sublime. The stories and accompanying photos are meant to sell vacations as a commodity and writers rarely divulge the most interesting elements of their voyage: the merchants who cheated them, the food which made them sick, and the tourist traps which weren’t worth the bother. Behind all of these shiny, happy travel stories is the false notion that readers want to read about someone else having a good time on vacation.

Mr. Bowles knew better. And his brutal honesty is evident throughout the works represented in the book. He was the consummate expatriate—sought out by scores of dreamers, junkies, and adventurers alike—who became synonymous with Morocco and Tangier in particular. But as this collection illustrates, he never glamorized his adopted home, or any of the other places he described. And he had no qualms about depicting ignorance, mendacity, and avarice where he saw it.

Writing in The American Mercury in 1951, Mr. Bowles seemed to be trying to scare visitors away from Tangiers, if anything.

“Tangiers is a city where everything can be safely counted on to go wrong,” he wrote. “Everyone is in such a hurry to buy, build, and sell that there is no time to see that anything is properly done, and so, you open the door of your bedroom and it falls over on top of you; you turn on the water and the wash basin collapses; you sit down to dinner and the chandelier hanging over you crashed into the middle of the table.”

He noted a “new type of American traveler” on the streets of the city, who favored beards and “belligerently informal clothing.” Mr. Bowles memorably described these lamentable creatures as “nihilistic mystics living on V.A. checks, Fulbright fellowships, gifts from casual acquaintances, and the occasional scraps from home,” attracted by cheap drugs and the promise of eastern exoticism.

By 1958, Mr. Bowles seemed to believe that Tangier’s golden age had long past.

“Although the people who love Tangier sometimes think there is a conspiracy afoot to make it the most hideous place on earth, actually such a project would prove quite difficult,” he wrote. For “there is nothing left to spoil.”

Mr. Bowles is similarly preoccupied with the warts he finds in every corner of the globe. In “Letter from Kenya,” he describes riding decrepit buses in Nairobi and visiting the homes of locals mired in desperate poverty. Istanbul taxi drivers “have a petty custom of offering cigarettes at the beginning of a journey; this is to soften up the victim for the subsequent kill.” And Casablanca is described as “a vast shell. . . . one gets the impression of a town just evacuated by retreating forces.”

There is also very little of the kind of self-congratulation common amongst many other expatriate writers evident in Mr. Bowles’ work. For example, writing in Holiday in 1958, he noted how little he paid his maid—just $8.33 per month—which he claimed was a low wage “even for Tangier in 1958.” He even churlishly added that she “gets no food from us.”

But while Mr. Bowles’ candor is on evidence throughout his work, sadly, very little of his fascinating life bled out into the pieces represented in this volume. Theroux writes in the book’s introduction that Mr. Bowles’ wife, Jane, had a number of passionate affairs with women, including one serious relationship with a woman named Cherifa whom Bowles suspected was a “witch and poisoner.”

Mr. Bowles describes Tangier as a city filled with eccentrics, but divulges nothing about the ones inhabiting his own home. Surely, we wouldn’t expect Mr. Bowles to descend into an Eat, Pray, Love funk of navel gazing, but a bit more personal context would add much to these stories.

And while Mr. Bowles’ hardcore devotees and those with the luxury of time can celebrate the length of these meandering stories, the reality is that bigger isn’t always better. Much of the magic of Mr. Bowles’ work is his power of observation, but I could have done without, for example, a 4,000-word story on parrots that crudely opined, “the uneducated, unsophisticated Indian makes an ideal companion and mentor for the parrot.” Indeed, there are several stories in the collection where the reader cannot but wonder what Mr. Bowles was smoking when he put pen to paper.

Still, there is much to admire in this volume, and fans of Mr. Bowles will lap up his vivid prose like hyenas feasting on a fresh carcass. Few others could, for example, conjure up a more impressionistic view of Istanbul than Bowles, writing in 1955. “The cupolas and minarets rise above the disorder of the city like huge gray fungi growing out of a vast pile of ashes. For disorder is the visual keynote of Istanbul.”

Such flourishes notwithstanding, the most enjoyable part of this collection may actually be the detailed chronology of Mr. Bowles’ fascinating life in the back of the book. Here we learn not only of Mr. Bowles’ literary triumphs and travails but also of his peripatetic life, his early days living in Queens as the son of a dentist who survived a bout of influenza during the worldwide epidemic, and, perhaps most interestingly, some of his early adventures. Before settling in Tangier, he worked as a switchboard operator in Paris at the Herald Tribune, served as the live in companion of a wealthy Austrian invalid in Baltimore, and was detained in Ceylon as a spy.

Mr. Bowles was a composer, music ethnologist, writer, and translator. He liked to get high, to be sure, but thankfully for readers, his travel writing was more lucid than trippy.