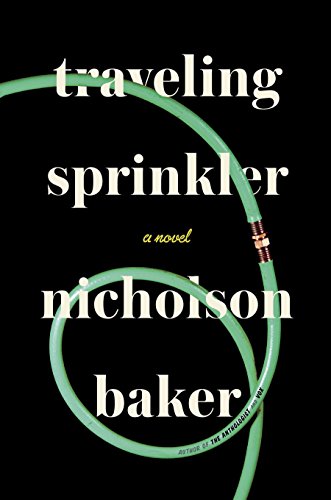 Nicholson Baker often comes off a lovable, sweet, teddy bear of a writer. His prose is soaring perfection even when he's writing about the most mundane things, like a chicken in the yard of his main character's neighbor or a barking deer, startling him in the dark. Even a bassoon.

He's the only writer who can switch from poignant to hilarious without missing a beat. He's also one of the most intelligent authors on earth: a musical and literary genius.

Traveling Sprinkler is unsurprisingly outrageously wonderful. If you've read The Anthologist, or even if you haven't, main character Paul Chowder will win you over before the end of the first chapter, possibly before the end of the first page. A part-time poet, part-time songwriter, and former anthologist facing his 55th birthday, he lives alone, pining for his ex and love of his life, Roz.

The two remain so close they know each other's thoughts, share old personal jokes, and enjoy the comfort of each other's company curling up companionably on the couch and watching old movies when her boyfriend's away. She's moved on, she tells him. She's with another man.

Does she love that other guy? Neither Paul nor the reader can help asking.

The main body of the novel—which reads like Chowder's personal diary—consists of a whole lot of everyday life. He spends time writing poetry and songs, often while sitting in his beloved Kia, parked in "dappled shade." His passion for music runs deep, his taste eclectic, hitting on everything from classical to rap.

He buys himself a guitar as his birthday present to himself, singing his own pieces and mentoring his neighbor's teenage son, careful not to hit the small skin graft on his thumb, souvenir of a past injury.

His days have no real structure. Instead, we follow along with him through his adventures and misadventures, his reminiscences of the past and ponderings on life, popular culture and pretty much everything else he runs across. Then something unusually dramatic will impose itself, such as the time his barn burned:

"Half of the first floor was gone, fallen down into the underbarn, and with it had tumbled about a hundred boxes of books and papers. Most of my collection of old anthologies was down there, the edges of the books visible from torn and squashed boxes—also my father's art books and his books on the history of chairs, and my mother's books of medieval history, and boxes of family photographs and letters—all mixed in with miscellaneous junk, a catcher's mitt, a sun-faded life jacket with mildew stains, my bicycle that I hadn't read this year because the chain is broken, Roz's old bicycle . . . I saw one of my traveling sprinklers on its side, looking rusty and pathetic, on a box of something marked FRAGILE—STORE ON TOP. I was looking down at a huge hole in the barn with a lot of my life in it. I surveyed the scene for a moment and said, ‘Fuckaroo banzai.’"

In this one section lie what's at the heart of him, or the guts, maybe. Books, papers, memories of his family and Roz . . . and the sprinkler. The traveling sprinkler with which he has a minor obsession, an odd but ubiquitous sort of inanimate object he collects and thinks one day he will write poems about. He owns several of them, bought from eBay, only one that works, that he actually uses.

After the fire he makes note of the "rusty and pathetic" look of one in his collection. A metaphor for the life of an average and lonely man in his mid-fifties? Could be. It's one thing that catches his eye as he looks down on his "life," immediately followed by his funny, yet devil-may-care curse.

All this is so Paul Chowder: the character the reader could not fail to love.

The Traveling Sprinkler contains one deep-thinking man's dreams and foibles, sadness and inspiration. Above all, it's about his loves: of Roz, of music, of poetry. . . . It is beautiful and funny and touching. Paul Chowder is charming and fallible, a lonely man making the best of things until he can hopefully one day win back the love of his life.

This is a book to sink into. Don't start it if you don't have the time to read and read and read. It's 291 pages of divinity, a love song to literature, a joy. And it's a testament to the continued brilliance of Nicholson Baker: American treasure.