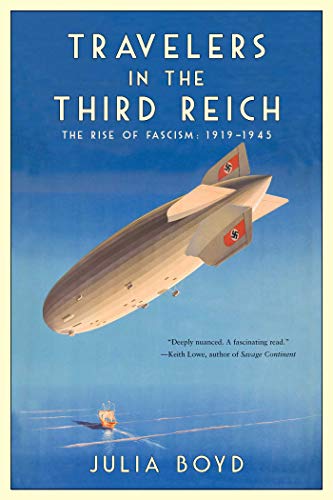 “These are the times that try men’s souls,” wrote Thomas Paine, and his pamphlet is as instructive today as it was in 1776. America is faced with the real potential that our president will desecrate our form of government in an egocentric and deranged effort to protect his own skin. For those who think this analysis protests too much, remember what happened in the Weimar Republic when the German populous allowed an Austrian housepainter and his gang of miscreants to corrupt a democracy. Julia Boyd’s book is a helpful Baedeker. The Third Reich is what happens when the democratic multitudes lack the courage to stand up and confront those who would do them harm.

In Travelers in the Third Reich: The Rise of Fascism: 1919–1945 Boyd relates the stories told by American and English visitors to Germany from the end of the Great War until the end of the Second World War. It is a useful addition to the abundant literature about the Third Reich. She retells the political story using the words of the occasional traveler to Deutschland.

Of course, these observers of the Nazi cataclysm were not a representative group of foreigners. They were decidedly upper class and often quite naive, but their observations and experiences during the gestation period of the Nazi’s authoritarian rule offer helpful warning signs to any who would want to preserve their democratic republic.

Throughout the 1930s, British patricians, war heroes and academics visited Germany to witness first-hand the Nazi “miracle.” Those who came to Berlin with their own anti-Semitic prejudices found Hitler’s regime to be a splendid model for England to emulate. Those who were more objective were ready to concede that the Nazis were committed to peace and prosperity. They did not realize they had been duped.

Boyd reminds us that Hitler and his Nazi gang took power fully in accordance with the normal and established democratic procedures of the Weimar Republic. Although the Nazis captured Germany with less than majority support, they acted as if they were the overwhelming choice of the German people. Everyday Germans who felt they had been left behind during the first decade of the postwar era and had been sold out by Wilson at Versailles saw in Hitler’s egotism their own spiritual rehabilitation. All these components find their counterpart in the current situation created and maintained by the Trump regime.

Hitler had long recognized the importance of blaming other people for the circumstances Germany faced. For the Nazis, it was the communists and the Jews who were at fault. They would be made to pay with their lives. For the Trumpists, it is immigrants who are at fault as well as the elitists on both coasts. The U.S. border guards kidnapped immigrant children as a warning to the world that America had returned to “prominence.” Hitler vowed to return Germany to its greatness; Trump has promised to make America “great again.” The similarities are chilling.

As the Nazis tightened their control over the Reich—a story that Boyd tells quite well using the words of her travelers—the regime employed widespread arrests and violence to support its vile program. Trump too has encouraged his rally crowds to use violence against protesters and “the enemies of the people,” the epithet he hurls at the media. Hitler quickly moved to the next step: rounding up those who would threaten his autocracy. Trump has not yet arrested his enemies, only listing them publicly as subject to sanctions while threatening them with incarceration for criticizing him.

Books such as Julie Boyd’s fascinating volume fill in more of the picture of the evil painted by Hitler. Although not its purpose, the publication also stands as a beacon to warn others. It will not suffice to be, as Thomas Paine taught us, a mere “summer soldier and the sunshine patriot.” To resist, we must stand against malevolence when it appears. Remember the past so we need not be condemned to repeat it.