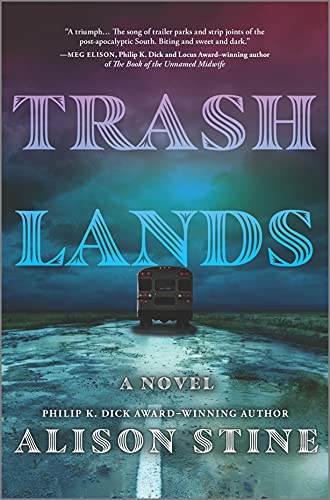 The characters in Alison Stine's new novel, her second, have names like Trillium, Rattlesnake Master, Shanghai, Miami, and Coral, a young woman who was abandoned by her mother and who has lost her own son. Coral is the central figure in a large cast of characters.

Trashlands isn't a realistic novel, but rather an adventure story set in a future time that is very much like present day America, only more so. Stine's work might also be called "fantasy fiction" in which the memes of 2021 are exaggerated and embellished.

And why not? True, the old-fashioned realistic novel of family life isn't dead. Witness Jonathan Franzen's popular books: “The Corrections,” “Freedom” and “Crossroads” and with more of the same on the way.

Still, in many respects the realistic novel seems to have outlived its ability to amuse, instruct, and serve as a mirror of contemporary morals and manners. Years ago, Kurt Vonnegut, Doris Lessing, Marge Piercy, and others turned to science fiction, "space fiction," and what has been called "dystopian allegory."

Like Vonnegut and Lessing, Stine aims to entertain, sound an alarm, and wake readers to an environment in which "everything is temporary," the news is always old, and the weather comes "from everywhere and nowhere at once." Sound familiar? It ought to.

Stine’s Trashlands is two places. It's a vast junkyard in rustbelt America, aka Scrappalachia, and it's also the name of a sleazy nightclub owned and operated by the lecherous, onerous Rattlesnake Master, who persuades young women to dance for old men who are too beaten down to know which way is up.

Scrappalachia is a scary place, but it likely won’t give you nightmares.

Patriarchy is in the saddle and rules in Trashland, though not all men are evil. Miami, the journalist from the big city—where there is still a semblance of civilization— means to inform urban readers about life beyond the pale and the resilience of the lowly inhabitants.

Mr. Fall, a veteran storyteller and teacher, connects to the young and preserves the wisdom of the past. Young Trillium, like Coral, is an artist. Both of them turn trash into beauty and honor humankind.

Stine herself seems to believe that people can still get it together, survive, and even thrive, though one of her characters, Tahiti, says, "It's too late. We're too fucked up."

Readers who are depressed by global warming and pollution from the fossil fuel industry will likely agree with Tahiti. Others will want to echo Ramalina, the healer and midwife who urges those who listen to her to learn to say no, to speak up and to trust themselves.

Trashlands is largely character rather than plot driven. New characters keep showing up while old characters fade in and out of the picture. At times, there can be too many of them.

Still, the dialogue is always riveting and much of the prose is inspired. "Violence tinged almost everything they did, like a sheet of ice," Stine writes. "Anger infused their bodies."

At times, the author herself seems to be fueled by anger. Indeed, anger about the patriarchy stokes her creativity. But she is not only angry. A loving author, her love fills Coral and Mr. Fall, the protector and rescuer of children who owns a bus painted the colors of the rainbow.

Mr. Fall is wise enough to know to rescue himself. He has the last words in the book. “Put on your seat belts,” he tells the kids in the bus and then drives right through the apocalypse.

Trashlands is definitely aimed at adults, though teens and even preteens might like the weirdness, the adventure, and the cool cool characters with whom they can identify.