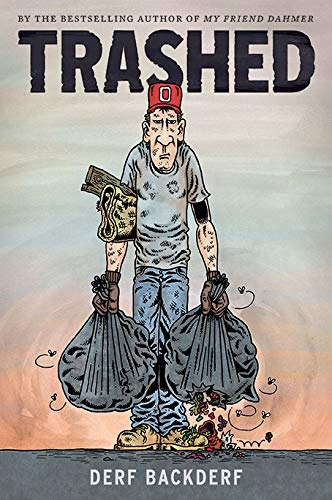 If readers ever wished Mike Rowe would create a comic out of Dirty Jobs then this is the book for them. In fact, the cover character of JB rather looks like Mike Rowe. Trashed is an excellent piece of fiction by Derf Backderf in which the author relies on his experiences as a trash collector on a sanitation crew in the 1970s and 1980s in small town Ohio to tell this tale. There is a sense of Charles Bukowski in this ode to the working man, to the garbage, the trash and grime, the unbearable and disgusting of the earth from maggots to liquefied garbage.

Not only does JB collect the garbage, the soup at the bottom of the bin, if the garbage can is cheap and breaks, he has to collect the garbage into his arms. He also collects the roadkill, has to fight off neighborhood dogs and deal with pranksters, an uptight boss, and idiot coworkers who accidentally scrape him and others off the back of the garbage truck onto stop signs and mailboxes. JB must also endure all sorts of weather that affects the garbage in various horrific ways—enhancing the smells or freezing it solid.

Not only do readers get humorous insight into the soul-sucking job as 21-year-old, college-dropout JB deals with it, but there are also historical interludes on the treatment of garbage from the first sanitation crews to recycling to dumps today.

Facts are woven seamlessly into the story, such as when he picks up dirty diapers, readers are told facts on how much garbage Americans go through (1,847 pounds per person a year), or how a garbage truck, such as the one JB has named Betty, actually works. The statistics are sobering and staggering. Mr. Backderf informs readers in his notes that the statistics and information he provides comes from his experience, fact-finding visits, The Columbia University Biannual Report on Municipal Waste (2014), and the E.P.A. Report on Municipal Solid Waste (2013).

The characters’ dialogue is realistic, and the text is easy to read and enjoyable. The illustrations are clean pencil lines and reminiscent of an alternative comics style, but they are equally gory—especially when dealing with roadkill—and a reader won’t be able to help but grimace as they see the bottles of pee explode or the grime and shit backfire onto JB as the compactor in the truck chews through the garbage soup.

As depressing as the book may at first come across as readers recognize the amount of waste they create in a single week, the book is still fun, funny, gross and engrossing with its unique characters and their various shenanigans (from a mailbox stuffed with garbage to bar fights with coworkers).

The focus is uniquely American, though Backderf does briefly mention various alternatives to trash disposal used by Europeans such as the incinerators invented by Scandinavians that “burn so hot” that everything is mostly completely gone with “no harmful emissions at all” and “the gas is used to power clean energy plants.”

This is a very timely graphic novel. It is hopeful readers will pay more attention to the waste they create and the ecology of the landfill, and encourage alternative solutions and recycling, or vote for the people in this upcoming election year who seem to be the best candidate for making this world safer and cleaner today and tomorrow.

At the very least, hopefully readers will be more conscientious when packing their garbage and putting it out to be collected by those men and women who do the job many others don’t want to.