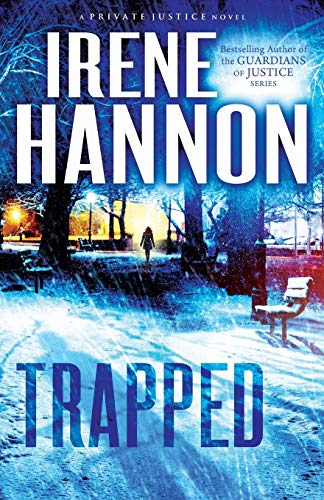 Irene Hannon has written a tale of suspense that has all of the elements needed to become a bestseller. It comes as no surprise that she’s a two-time RITA Award winner, and that she has garnered a host of other awards. With more than 35 novels to her credit, she knows how to develop characters and stories that readers love to embrace.

In Trapped, the author takes a contemporary theme—teenage runaways—and weaves a very believable story about the dangers facing these naïve youngsters as they try to live on the streets.

Darcy is Laura Griffith’s 16-year-old sister, and only remaining family member. With nowhere else to go, Darcy has come to live with her older sister. A typical teen, Darcy feels her librarian sister’s rules are too restrictive. Thus she hatches a secretive plan to take a bus to Chicago to meet a friend, but a major snow storm cancels her trip. While waiting for the storm to clear, Darcy befriends another runaway at a homeless shelter.

That’s where her troubles begin.

Ms. Hannon has created a diabolical protagonist, Mark Hamilton. He suffers from OCD and depression, but is ostensibly a compassionate, caring humanitarian. Mark volunteers at the shelter where he meets and befriends Darcy. Bad move on Darcy’s part. Mark also works at a daycare center, serving to give him an aura of respectability, and allowing him to hide in plain sight. His charade is well played and keeps him above suspicion.

When Laura discovers Darcy is missing, she employs private investigator, James “Dev” Devlin to help find her. A former ATF agent, Dev has his own demons to deal with. But when Laura and Dev begin to collaborate on trying to determine Darcy’s whereabouts, the heat generated between them is no match for the winter snowstorm.

With just the right amount of suspense, danger and deception, Trapped is engaging and satisfying. The prose is crisp and to the point, creating the scene effortlessly with lines like these:

“Fitting her fingers under the lip of the lid, she lifted it. Leaned over. Froze. A booming roar thundered through her brain.”

Ms. Hannon’s PI has just the right amount of swagger and confidence, making him quite pleasing in his role. His former career as an ATF agent places him head and shoulders above most private investigators. As such his instincts regarding the missing teen do not seemed contrived.

Suspense and romance team up to make Trapped a worthwhile read.