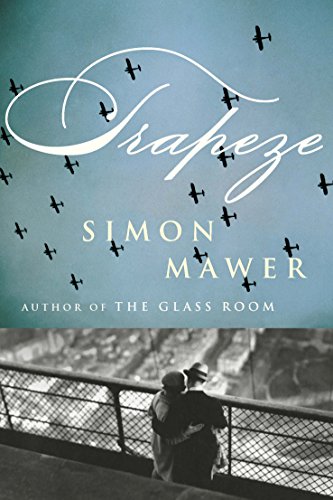 “Incorporating many of the finest elements of spy thrillers and even romance novels, . . .”

Trapeze is a thoroughly engaging, well-researched novel about a young French-speaking British woman who is sent to German-occupied France on a dangerous secret mission during World War II.

Between 1941 and 1944, the French Section of the Special Operations Executive (SOE) trained and sent fifty-three women for combat and into the field.

Trapeze tells the fictional tale of one such woman, Marian Sutro, who at the age of nineteen is working for the WAAF and is tagged to train as a spy and go to France on a secret and risky mission, code named, “Trapeze.”

Trapeze is rich in historical detail about World War II England and France, the military, spying, physics, and the development of the nuclear bomb. Since part of Marian’s assignment is to go to Paris and convince a family friend and first love, who is a research physicist, to join the Allied war effort and return with her to London, Mr. Mawer includes a good bit of information about physics and the bomb.

The discussions among the various characters about the ethics, ramifications, and perils of atomic energy are reminiscent of some of the ideas raised in Michael Frayn’s play, Copenhagen.

Simon Mawer uses clean, clear, straightforward prose that is effective in telling a war/spy story. His writing works best when it is understated and simple yet abundant in detail.

The narrator describes le Patron, one of Marian’s contacts in France: “His face is worn with tiredness and worry. She recognizes the look from the days of the bombing in London, the expressions on the faces of the rescue workers, the men who tunneled into the rubble to pull corpses out, the women who drove ambulances through the wrecked streets, the people whop were up all day and all night and lived constantly in the shadow of death.”

Less effective is when Mr. Mawer attempts lyricism. He describes barrage balloons “floating like great airy maggots.” The author also occasionally lapses into clichés when analyzing his characters’ thoughts or detailing their musings: “Do the constellations care about what goes on in this cold, sublunary world? Ned would say no, of course. The universe is indifferent.”

Using the present tense, the narrator opens Trapeze in the fuselage of a plane from which Marian is about to jump and parachute into France. The story then goes back in time, using the past tense, to tell what led up to Marian’s landing in France and then reverts back to the present tense to narrate the remainder of the novel.

The use of the present tense is particularly effective in maintaining a state of suspense. When Marian fears that she is being followed in Paris, the narrator explains: “A tide of panic threatens to overwhelm her. She turns. Behind her two men are silhouetted at the entrance to the impasse. She looks back and the stairs are empty. . . . ‘You, come here!’ one of the men shouts.”

With the exception of Marian, most of the other figures in Trapeze are stock characters that are not very psychologically complex or believable. The gruff, cigarette-smoking Patron is a caricature of a member of the French Resistance, while the British officers are very formal, proper, and tight-lipped.

Although Marian is by far the most developed and complicated character in the novel, she still comes across, at times, as a typical figure from a spy thriller whose motives aren’t entirely credible.

Even though it is not a sophisticated character study or poetic, Trapeze is a thoroughly gripping, informative, interesting novel. Mr. Mawer is a fine researcher and a wonderful storyteller.

Incorporating many of the finest elements of spy thrillers and even romance novels, Trapeze is a fascinating tale of and homage to the resistance fighters and members of the SOE.