Trans Mission: My Quest to a Beard 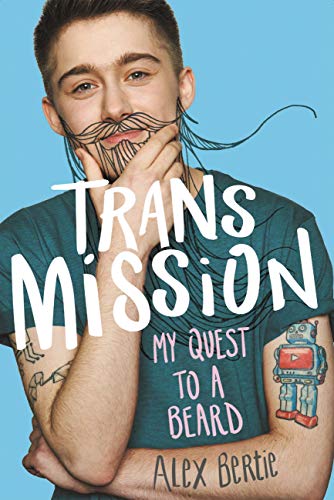 This book about a young transgender (trans) man is simply brilliant. It’s captivating, endearing, and well-written and will bring self-confidence and joy to other young trans people struggling to open up about their gender identity. Even if the reader is not trans, they will find this a most interesting and informative book.

Alex Bertie is a 22-year-old graphic designer and although assigned female at birth realized at an early age that he was in fact male. His story tells of his struggles for acceptance from his parents, friends, teachers, and health professionals, but ultimately presents positive outcomes and shows how Alex encounters more understanding than ignorance during his transitioning.

Alex describes the first moment he realized he was a male “trapped” in a female biological body, and from that moment started to take steps to reveal his true gender identity to the world. He knew that transitioning would entail a lifetime of treatment, but something deep in his psyche knew he could never be happy living in the opposite gender, indeed, it would have rendered him a “prisoner” in the biological body he inhabited.

Alex made YouTube videos of his life for several years outlining various aspects of his transitioning, including his feelings and thoughts on different aspects of the process before deciding to write Trans Mission. The book is an extension of his videos and provides him the opportunity to tell his story, its ups and downs, its trials and jubilations. It is sensitively written and devoid of self pity. It expresses more gratitude than blame.

There is rawness to his story that comes from a place of authenticity. Alex states from the outset that he is writing from his personal experiences and that his opinions and choices may not concur with those of other transgender people. With this in mind he takes the reader on a journey that sees him changing his name and the different pronouns that come with this, hormone treatments, and the physical changes that take place within his body, his body dysphoria and the relief he feels after chest surgery.

Alex also describes clothing, hairstyles, and keeping fit as part of his transition —and his tattoos, which he really likes. He refers to the contentious issue of detransitioning (when a person changes their mind and reverts back to their birth assigned gender). There is also a lovely chapter written by Alex’s mother who provides insight into her perspective as a parent. This will be particularly relevant for other parents who will be able to empathize with the challenges and blessings of being the parent of a trans child.

Despite Trans Mission being very good, it would be wise to read other trans books too in order to find greater clarity on some pivotal issues that sometimes feel glossed over rather than explored in any meaningful detail. Although Alex talks about his period of self-harm, it would have been good to know what made him stop and any advice he would offer to other young trans people, given that this affects a large percentage of their community. Likewise with suicidal ideation and suicide itself, which occurs frequently in the trans community. There is also no mention of the growing awareness of research suggesting a link between trans men and autism, which is surprising given that this is a contentious matter among trans men.

Sex and sexuality are other aspects of the book that lack substance. Prior to transitioning, he said he was a lesbian and since transitioning is now a gay male. Alex is correct that it is nobody’s business what genitals he has in his pants, and most readers will agree that it is downright inappropriate to ever ask a trans person intimate questions out of context, but here lies the problem; this is a book and an ideal opportunity to address some naturally inquisitive questions about what is commonly being referred to as “queer” sex,  especially as films and literature are behind the times in depicting the sensitive nature of genital dysphoria that affects a large number of trans people, including Alex. He said he and his partner make sex work but there is an overriding inference that a lot of trans people are in sexual relationships.

Alex seems to be the one of the lucky ones who had top surgery on the NHS relatively quickly, which may in part be as a result of his local health authority. His statement “Many trans people in the UK have access to surgery and hormones on the NHS, but the wait for those treatments can be long” is partly an understatement. While the NHS has long waiting lists for hormone treatment the wait for trans surgeries is tenfold because these surgeries are considered elective. This results in large numbers of trans people travelling abroad for reassignment surgery. It is not uncommon for trans men in the UK to travel to the USA for top surgery. Only a small number of men have bottom surgery, and even those who wish to proceed are prevented from traveling abroad for the procedure because of substantial costs (£40,000+).

Overall, this is an excellent book highlighting the long way trans people have come in recent years and showing the journey and improvements society has to make in order to make transgender issues more acceptable. Maybe in 10 years’ time, it will be the norm for everybody to personally know a trans person. If this is the case, it will be as a result of Alex and other brave souls like him who have had the courage to come out and become the person they have always been since the moment of their birth.