Tragedy, the Greeks, and Us 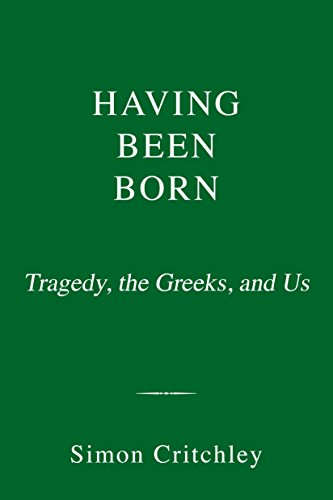 “What if we took seriously the form of thinking that we find in tragedy, and the experience of partial agency, limited autonomy, deep traumatic affect, agnostic conflict, gender confusion, political complexity, and moral ambiguity that it presents?”

It is widely agreed that the legacies of ancient Greece are a cornerstone of Western civilization, yet for those of us who have not had the privilege of an education in classical Greek literature and history, we have little idea what this means. From this distance, the world of the ancient Greeks seems remote, impenetrable, and ultimately, perhaps irrelevant. What can they, so primitive and pagan, tell us 21st century sophisticates about how to live today?

Simon Critchley, the author of Tragedy, The Greeks, And Us, is well equipped to address that question. He’s the son of a working class family from Liverpool who once stated that his only religious commitment is to the Liverpool Football Club, has played in numerous Punk Rock bands in his native England, and continues to create intellectually-charged music videos with his band, Critchley and Simmons.

On the other hand, he’s also an acclaimed University of Essex-trained Professor of Philosophy, whose academic posts include stints at numerous institutions including The New School for Social Research, where he became the Hans Jonas Professor of Philosophy in 2011. His Wikipedia page lists his many books, in which he writes not only on philosophical themes like Deconstruction, Nihilism, and political theology, but also topics such as Humor, the poetry of Wallace Stevens, and David Bowie. Since 2010, he has been the moderator of The New York Times column, “The Stone.”

In Tragedy, The Greeks, And Us, Critchley sets out to explore how and why the plays written around 2500 years ago are relevant, and indeed, urgent, for our understanding of the human condition, and more importantly, our present moment.

“Ancient tragedy is not ancient. It is quintessentially modern . . . What if we took seriously the form of thinking that we find in tragedy, and the experience of partial agency, limited autonomy, deep traumatic affect, agnostic conflict, gender confusion, political complexity, and moral ambiguity that it presents?” Critchley asks in the introduction.

He argues that the legacy of Plato, which championed philosophy over drama and had little but disdain for poets, steered Western civilization toward prizing the “rational,” mastery of the self and moderation. Even Aristotle, in spite of his famous appreciation of the power of catharsis, directed our focus to “judge artworks as requiring coherence, unity, a beginning-middle-and-end integrity . . . all based on the tight internal rationality of plot.”

As he explores the way tragedy works, bringing numerous examples from the plays of Sophocles, Aeschylus, Euripides, and Aristophanes, Critchley asserts that the power of tragedy lies in its tendency to subvert this penchant for reasonable, neat plots and outcomes. “Tragedy is not some Dionysian celebration of the power of ritual and triumph of myth over reason . . . Sometimes tragic language exhibits the power of the weaker to become stronger through argument. But might in not also show the limitation of rational argumentation?”

The final section of the book is devoted to a discussion about the issue of fate as opposed to agency, as it plays out in the Tragedies. “. . . tragic characters . . . are neither free, nor are they causally determined. They exist in some space between freedom and necessity, where both are present, deeply interdependent, yet quite distinct, like the white and yolk of a hard-boiled egg. The name of this space is fate, which is not simply out of our hands, but requires our hands in order to accomplish it.”

Likewise, he examines the role of depravity, horror, and monstrosity that is central to the tragedies, claiming, that not only are these elements still resonant, but they are very much present in contemporary theater. “If we look back at much of what is most radical at the art of the last century or so, we can see that we are . . . dealing with . . . an art of desublimation that attempts to adumbrate the monstrous, the uncontainable, the unreconciled, that which is unbearable in our experience of reality.”

While Critchley is writing for the intelligent reader, (and yes, while it’s not necessary to be familiar with the dramas that he discusses, the book is even more rewarding if one is), his arguments are clearly drawn and his style is engaging and congenial.

The book is structured in short, pithy chapters with titles such as “Monstrosity—Or Aristotle and His Highlighter Pen,” “Aristophanes Falls Asleep,” and “Good Hegel, Bad Hegel.”  It is a format that suits our modern attention spans, as it makes the cogent, compelling argument that that we ignore Greek Tragedy at our own peril.

“. . . every generation has to reinvent the classics,” Critchley writes. “I think it the responsibility of every generation to engage in this reinvention. And it is the very opposite of . . . cultural conservatism. If we don’t accept his invitation, then we risk becoming even more stupefied by the present and the endless onrush of the future.”