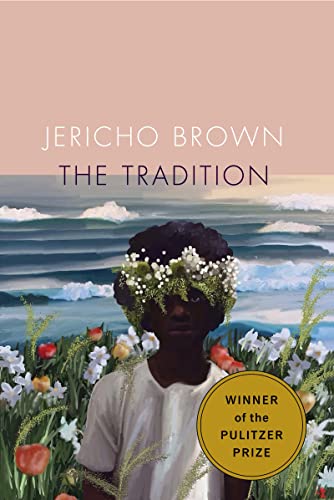 “In that larger tradition of transcendent art, if we let them into our hearts, these new poems from Jericho Brown will awe and unsettle us.”

Go read Jericho Brown’s The Tradition, his latest, stunning volume of poems from Copper Canyon Press, and then come back to this review.

Come back after you’ve tried to piece together the startling personal experiences and the broken literary conventions that Brown draws from for his poetry—from institutional racism to Romantic ideals; from family dysfunction to the lyricism of the African diaspora—in order to create such a compelling and vital art.

Come back to this review after—and only after—you’ve failed to make sense of all the dark violence he articulates, even though, like Brown, you’re moved to try again and again.

Read his devastating lines from “As a Human Being”:

“There is the happiness you have

And the happiness you deserve.

They sit apart from each other

The way you and your mother

Sat on opposite ends of the sofa

After an ambulance came to take

Because from the start, you’ll find this amazingly deft intertextuality of various traditions, which is then continued throughout the collection with a chilling interplay of whiteness and blackness. And yet, such analysis seems too sterile, too safe in light of this brilliant book. We should admire Brown’s art, but we must not stop there.

Why? Because, as Brown reminds us, directly and indirectly, the tradition of being a black man in America is incarceration and death. That’s the truth, found both inside and outside of his art.

Brown makes this clear from the title poem, “The Tradition,” in which the common names of flowers (plucked as if from the pastoral tradition) are found opposite the names of black men killed by police. It’s not “a” tradition. And it’s not plural. It’s “the” tradition—a singular life filled with fear, injustice, and death.

Here the literary scholar might note how other poets have also struggled against the weight of history and the constraints of the canon (e.g., Derek Walcott’s “A Far Cry from Africa,” and John Ashbery’s book of essays, Other Traditions), and sometimes their struggles have provided a window or two for us to breathe fresh air and flourish a little, while standing outside of literary categories and social constructs.

But here, in Brown’s book, we’re forced to stand squarely in the tradition we’ve made, and confront the dark reality outside on our streets. In one poem, the poet’s voice reflects on a young son playing on the playground: “In him lives my black anger made red. / They play. He is not yet incarcerated” (“A Young Man”); and in the poem “Bullet Points” he says plainly “When I kill me.”

Also, look closely: Brown doesn’t write, when I kill “myself” (the expected, reflexive pronoun), but when I kill “me.” The self, the agent of action, has become the object of the sentence.

Whether Brown dies by his own hand or someone else’s, his body is an object. He’s even divorced from his own death. Instead, his death will become part of that larger structure, that overarching tradition of white people devaluing and killing black people, a system that’s been supported for centuries in this country: “I am a they in most of America;” that’s the first line of “Stake;” and then we read later, “The blk mind is a continuous / Mind. There is a we. I am among them” (in the poem “After Avery R. Young”).

In this way, Brown extends our understanding of double consciousness, introduced to American thought by W. E. B. Du Bois. At the same time Brown is writing songs of the (multiple) self to very troubled America, drawing from the intertwined traditions of Walt Whitman, Countee Cullen, Langston Hughes, Claude McKay, Allen Ginsberg, and Claudia Rankine, among others who find themselves singing despite the violent world around them:

“And I sing, again, those songs because I know

The value of sweet music when we need to pass

The time without wondering what rots beneath our feet.”

These few lines here, coupled with the other nature-imagery throughout the book, recall the haiku from the Japanese poet Kobayashi Issa (1763–1827): “In this world / we walk on the roof of hell, gazing at flowers.” Indeed, it’s difficult (and probably pointless) to try to place Brown’s astonishing poems neatly within just one literary tradition. In this book, there is no one literary tradition.

And as with his previous books of poetry, whatever tradition Brown draws from, he also deconstructs and transforms. For example, here he is breaking apart Keats’ famous equivocation that’s governed much of the last two centuries: “. . . I am tired / Of claiming beauty where / There is only truth” (“The Rabbits”).

About halfway through the book, some readers may be reminded of the queer comedian Hannah Gadsby, who amazingly (and painfully) both uses and upends the conventions of comedy to tell a more pressing truth. Likewise, in The Tradition, Brown uses and subverts our expectations about English-language poetry to raise more urgent questions. In that larger tradition of transcendent art, if we let them into our hearts, these new poems from Jericho Brown will awe and unsettle us.

And here we are, nearly at the end of this review, and we haven’t even discussed the formal inventiveness of Brown’s poems in this new collection! We could go on, talking about how his work here recalls that of another Brown, Sterling A., a mid-20th century American poet, who also fused old and new forms, like sonnets and the blues, and who also constructed hybrid poems before hybrid poetry was even a thing.

Of course if you miss out on Jericho Brown’s powerful, delightful inventions here in The Tradition, that would be a tremendous shame.

But if you focus only on these formal inventions and forget to read more deeply into each and every splendid poem found in this new collection, well, then, dear reader, I’m afraid there’s no hope for you.

True, there may not be any hope for the rest of us, either, even after we’ve all read and then re-read this phenomenal new book cover to cover. But for those of us who do, for those of us who take the time to let these terrifying and terrific poems into our hearts, at least we’ll come to appreciate their timeless importance—and we may also begin to understand why each of us must do better by each other, every day.

Understand how you got here

And who you owe.”

(from “Meditations at the New Orleans Jazz National Historical Park”)

Because that’s how new traditions are made.