The Town of Babylon: A Novel 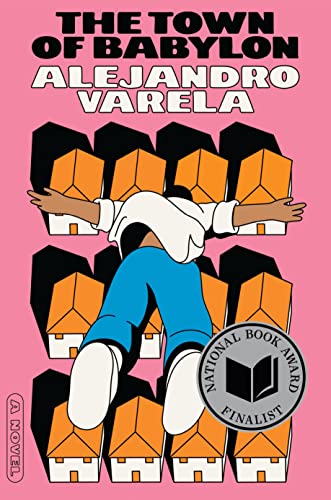 “In The Town of Babylon, Alejandro Varela, whose educational background is in public health, combines a social scientist’s powers of observation and analysis with a master writer’s ability to delineate character in rich, absorbing prose. This is a challenging, fascinating portrait of contemporary America.”

In Alejandro Varela’s fascinating, disturbing debut novel, The Town of Babylon, Andrés is a college professor living in New York with his husband, Marco, a doctor. Though he seems to be solidly in the upper-middle class, he, a gay Colombian American, feels like an angry outsider in a racist, homophobic culture. Andrés was raised in a Long Island suburban town that was for him a symbol of the cruelty of American capitalism. His parents moved out of the city to the suburbs because it looked like a step up, but they found that they would always be outsiders. Andrés, too, always felt separate from his high school friends.

At a critical point in his relationship with his husband, Marco, Andrés decides to attend his 20th high school reunion, even though he has lost contact with the people who were central to his life then; particularly Simone, an African American who was his best friend, and Jeremy, the white boy who was his secret lover. To move forward in his adult life and his marriage, he has to confront his feelings of desire and betrayal toward Jeremy, and re-establish a friendship with Simone, now living with schizophrenia.

Each of the characters has to deal with guilt and recrimination. While Andrés accuses his high school lover of deserting him, Simone accuses Andrés of not giving her the support she needed at a crucial time in her life. Andrés also confronts Paul, now a local evangelical minister, with a brutal, homophobic crime he committed as a teenager.

Coming home also entails rethinking his relationship to his ailing father and devoted mother. He also needs to deal with his guilt over his treatment of his brother Henry, who died at age 40. Henry never gained the coping mechanisms that allowed his younger brother to go to college and have a successful career. He always felt like a loser and felt that his family shared his opinion.

Author Alejandro Varela is particularly interested in the ways America, particularly suburban America, cripple those outside the white-dominated capitalist system. In different ways, because of race, class, ethnicity, or sexual orientation, Jeremy, Simone, and Enrique, cannot establish a healthy relationship with the dominant competitive straight, white world. Even Andrés, who seems to have a successful professional and personal life, seems trapped.

Andrés tells us, “I am unsettled by the past.” As he confronts his memories, The Town of Babylon moves back and forth in time. First-person chapters, set around the high school reunion, alternate with third-person chapters about the pasts of the central characters and their parents. Racism has poisoned their lives in various ways. The novel mixes fiction and acerbic social commentary. In many ways, it is an angry look at the mean side of American history and contemporary society.

A number of local residents moved from racial or ethnic urban ghettoes to suburban towns to find a better life for their children, and where they were never fully integrated into what playwright Tony Kushner called, “the melting pot that never truly melted.” Would their children have been healthier in a neighborhood filled with people who looked and sounded like them? The Black residents of this town are forced to live in the same six-block area.

How does someone like Andrés, raised by immigrant, working-class parents who never could attain financial security, make peace with a culture that seems to defeat most people? How can he forgive past betrayals and make peace with the dominant culture? Can Americans ever reject white supremacism?

The Town of Babylon is filled with rich character studies and powerful social criticism. It falls into a group of works of fiction that illustrate the ways American small-town life can stifle people who are different—for instance, works by Sinclair Lewis and Sherwood Anderson. Like many contemporary works by gay authors, Varela’s characters’ sexual orientations are givens, but not their “problem.” Coping in America is their primary issue.

For Andrés, attaining maturity and peace means embracing, forgiving, and loving his families, the family into which he was born, and the family he is forging with his husband Marco. There he connects with a fulfilling past, present and future.

In The Town of Babylon, Alejandro Varela, whose educational background is in public health, combines a social scientist’s powers of observation and analysis with a master writer’s ability to delineate character in rich, absorbing prose. This is a challenging, fascinating portrait of contemporary America.