The Towering World of Jimmy Choo: A Glamorous Story of Power, Profits, and the Pursuit of the Perfect Shoe 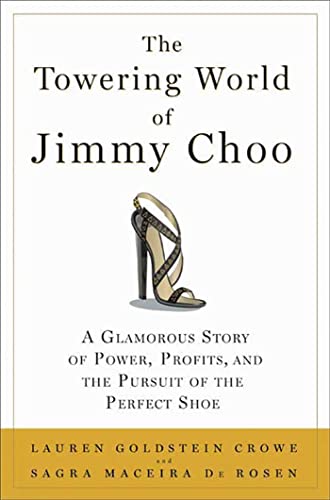 The subtitle of this book is “A Glamorous Story of Power, Profits, and the Pursuit of the Perfect Shoe.”  A more accurate subtitle would have been the story of how Tamara Yeardye Mellon parlayed being a daddy’s girl to party girl to marrying a scion of one of the world’s greatest fortunes, to stealing a company and believing that she was the only reason for its success.

The tale that Ms. Crowe and Ms. De Rosen tell is naïve in their belief that Ms. Mellon was some sort of genius when it came to the marketing and the growth of Jimmy Choo, when the facts are such that without the help of mumsy and daddy and their connections, Tamara was no more responsible for the huge success than she was responsible for hybrid vehicles.  Ms. Mellon was a one-shot wonder who was able to steal a company and cast off its original designer, then build up the brand with the finances and knowledge of her family’s connections and associations. This reviewer finds that the provided history is severely skewed in favor of Ms. Mellon, who in her infinite wisdom and that of Rachel Zoe (another know-nothing), steered Harvey Weinstein into buying the Halston brand.  It is interesting to note that Ms. Mellon withdrew from the Halston board and has left Mr. Weinstein holding a very non-lucrative brand.  Ms. Mellon is a glorified con who sued her own mother for “business reasons” and has proven that without proper management and direction a brand is worthless. The initial success of Jimmy Choo should be, in large part, credited to Ms. Mellon and her family, but the future of the brand has rested firmly on the shoulders of those who understand what success really means.  It should be noted here, that according to Ms. Mellon, success is based on having one’s photograph taken with movie stars, having her own stylist, and pounding her chest while proclaiming how fabulous she is. The book is a worthwhile read for those who are not inside the fashion business, as it does provide some insight into what it takes to become an international brand.  What this short history also reveals are the ego and hubris that are usually involved with the building of a brand—especially when one of the “founding” parties does nothing but talk the talk. Reviewer Jeffrey Felner is a columnist in Woman 2 Woman Magazine: Fashion by the Rules, and continues a long and successful career in jewelry and fashion design and merchandising.