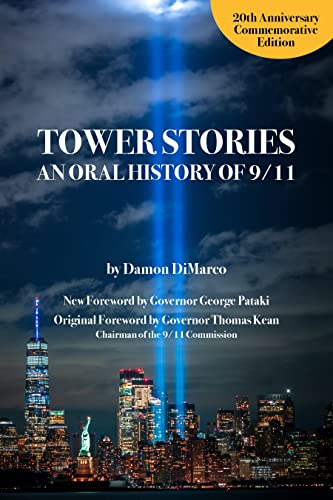 “Books like this are important as 9/11 continues to fade into past history for many Americans, a distant reminder of that period of time when all Americans united to overcome tragedy and serve one another.”

As we rapidly approach the 20th anniversary of 9/11, an entire generation of Americans is coming of age, such that this event is now merely a historical event like Pearl Harbor or the assassination of JFK. For those who remember that day, this anniversary will no doubt bring back conflicting memories, especially for those who lost loved ones.

It's important to never forget the human element of that tragic day, and this new book, now in a 20th anniversary commemorative edition, brings back the immediacy of that day through eyewitness accounts and longer-term retrospectives to transport the reader back to that fall day when America changed its course for the first two decades of the 21st century.

Originally published in 2007, the author conducted a series of interviews with New Yorkers—survivors of the Twin Towers, emergency responders, and other people caught up in the events of that day. Providing a wide variety of viewpoints, the author moves from inside the towers, to the street level, and into the many trauma centers and other locations where survivors of the towers tried to piece together exactly what happened while trying to determine if friends, co-workers, or family members survived the Twin Towers’ collapse.

Readers are reminded of the heroism and sacrifice of average people as they helped injured co-workers or strangers down dozens of flights of stairs, often in darkness, smoke, and confusion, wondering how damaged the building actually was and if they would make it out safely. The heroism of the city's first responders is also highlighted, as the author includes remembrances of firefighters who lost multiple friends that day, sometimes an entire truck company.

The utter confusion of that day is still striking, with the initial disbelief that anyone could deliberately crash airliners into a skyscraper quickly giving way to a desperate desire to get out of the buildings and escape the utter destruction of the location soon to be labeled Ground Zero.

But even as they make their way out of the buildings, the chaos continued. Initial casualty reports varied widely, with early estimates as high as 10,000 people, and it took hours for many survivors to make contact with family and loved ones to let them know they were safe. For others, it was also agonizing to wait for days or weeks for loved ones to be identified as casualties in the rubble.

But the tragedy and anguish did not end there. The author noted many of his interviewees in 2007 were already suffering coughs and respiratory ailments from the cloud of toxic dust created by the tower collapses. Over the next 20 years, dozens of survivors and first responders would die from cancer and hundreds of others would experience long-term illnesses from the dust cloud.

In this 20th anniversary volume, the author includes several retrospectives, some from his original interviewees and one particularly poignant interview from a child of 9/11 who became a New York police officer, following in the footsteps of her father who died that day helping survivors escape Ground Zero. Each of these highlight the forgotten victims of that day, the thousands of children who lost a parent, and the survivors still struggling with PTSD and its effects on their lives.

This year there will no doubt be many commemoratives and memorials for that day. Books like this are important as 9/11 continues to fade into past history for many Americans, a distant reminder of that period of time when all Americans united to overcome tragedy and serve one another.