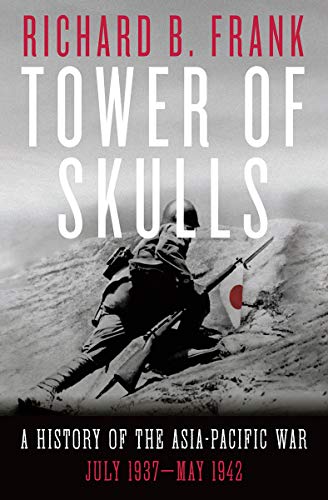 “a real game changer for the historiography of the Pacific Theater in World War II . . .

For anyone who has studied World War II for a long time, there are few books that can truly change your perspective on the war. However, with his masterful narrative, profound research and footnotes, and incisive analysis, Richard Frank has written such a book. This absolutely outstanding volume, the first of a planned trilogy on the Pacific War, brings to light some genuinely profound facts and understanding of how this conflict, begun over two years before Hitler invaded Poland, not only affected the global conflict it prequeled, but continues to impact Asia in the 21st century.

A couple of startling themes emerge from Frank’s chronicle. First, the entire Japanese march to war was neither deliberate nor strategic, but was driven by a combination of impetuous behavior from the Imperial Army and Navy combined with a fatalistic world view that even if a Pacific War with the United States was probably not winnable, it was inevitable.

There is also the fascinating account that the Japanese quagmire in China was not a deliberate action but a series of opportunistic offensives starting in 1937 that struck deep into China. Many of these attacks were led by Japanese Army officers in defiance of orders from their superiors, the civilian government, and even the Emperor. Once in China, the Japanese Army, soon the de facto government of the country, was loath to entertain any withdrawal, leading to a costly stalemate that absorbed a significant portion of the Army while preventing any hope of peace negotiations with the United States.

Second, the Japanese military behaved with a brutality, especially toward the Chinese or any other conquered people, that was easily as horrible as the numerous war crimes committed by the Nazis. Frank describes the Japanese use of poison gas on Chinese soldiers (the only combatant in World War II to do so), the massacres of thousands of civilians in China, the brutal treatment of prisoners of war, and numerous other acts of barbarity that soon made the Pacific War a contest without quarter or mercy. These horrific acts continue to impact Japanese relations with their neighbors 75 years after the war ended, particularly China and South Korea who frequently accuse Japan of minimizing the war crimes committed by their armed forces during the war.

Not only is Frank’s writing brisk and compelling, but his extensive study of the Pacific war provides the background to offer shrewd  analysis at all three levels of war during this critical period: strategic, operational, and tactical.

At the strategic level, the numerous failures of the Allied forces to not only prepare for war, but consider war probable led to many false assumptions about Allied versus Japanese capabilities and intentions, the most telling of which was the Japanese attack on Pearl Harbor.

At the operational level, the Japanese actually exceeded Hitler’s achievements in conquest, seizing nearly all the Western Pacific and large portions of China, occupying a significant part of the globe by early 1942.

At the tactical level, the Japanese truly stunned the complacent Allied forces with their ability to conduct slashing attacks with their infantry through difficult terrain and conduct simultaneous amphibious assaults over a large geographic battlespace. The technical capabilities of Japanese aircraft and ships also came as a rude awakening to Allied forces, long accustomed to presumed superiority over their foes.

But Frank also offers some telling previews of the overall Japanese weaknesses that will ultimately doom their war effort. First, the Japanese began the war without any real strategic plan, assuming their lightening victories would compel the Allies to sue for peace. Pearl Harbor’s effect on the American psyche pretty much rendered this idea moot, and the Japanese would soon find themselves in a total war with the world’s greatest industrial power, a fact not lost on many Japanese senior military officers. Second, the Japanese Army, for all its tactical prowess, was not truly a modern mechanized force, which not only impaired their battlefield capability, but showed their logistical shortcomings to maintain a large campaign.

Some of the interesting “might have been” offramps of the war explored by Frank include the Japanese obsession with the Soviet Union and how this might have changed the entire outcome of World War II. The Japanese considered Russia to be at least as big a threat as the United States, and for much of the time before Pearl Harbor, the Imperial Army agitated to attack the Soviets, especially when it appeared Hitler would triumph in his 1941 invasion. However, as Mr. Frank details, the Battles of Khalkhin Gol fought between the Soviets and Japanese in a series of 1939 border skirmishes not only presented the Japanese with pause about attacking a clearly better mechanized Red Army, but led to the rise of General Georgy Zhukov, soon to be the premier Soviet commander of World War II.

This massive tome is a real game changer for the historiography of the Pacific Theater in World War II. Covering the sweep of the fighting from Burma to the Central Pacific as well as the politics and strategy of all the major combatants, readers will definitely be left anxiously awaiting Frank’s next volume.