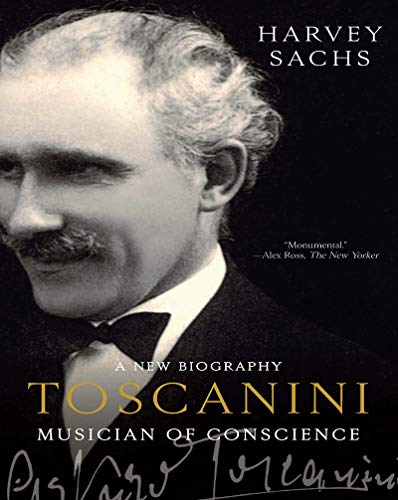 “[Sachs’] impeccable research and dimensional portrait of the Toscanini and his times is a towering achievement of the biographer’s craft.”

Harvey Sachs’ new biography of conductor Arturo Toscanini opens in war-ravaged Italy in 1943, as the 79-year-old maestro backstage at La Scala after 16 years in self-imposed artistic exile. Toscanini was Italy’s musical national hero, but in the 1930s, as the fascist regime came to power, Toscanini became a very public critic of Benito Mussolini and vowed never to return to his beloved country until Il Duce and his collaborators were gone.

Sachs freezes that scene and flashes back to the Toscanini’s birth 80 years before, and the maestro’s early years as a musical prodigy. And for the next 850+ pages, Sachs enthralls with the details of the life of this singular figure who defined the worlds of opera and symphonic music for generations.

He became an artistic force of nature and fearless voice on the world stage as a musician of conscience who used his art and celebrity to resist and fight against fascism and the rise of anti-Semitism in Europe and the US.

There have been many biographies of Toscanini, several by Sachs in fact, but A Musician of Conscience is the most comprehensive and definitive to date. Toscanini’s descendants allowed the author access to some 1,500 private letters to and from Arturo—everyone from Verdi and Puccini to his numerous lovers around the opera world.

Without Toscanini’s knowledge, his son Walter secretly recorded gatherings at his home in the 50s of conversations he had with musical colleagues, family members, and friends. He knew that his father refused to participate in any authorized biography during his lifetime, so Walter had set up a studio for his father so he could listen to his own recorded concerts that were to be considered for commercial record release. After the tapes were transferred to digital files they were made available to Sachs who writes that they inform every chapter of this book.

Toscanini amazed his early music teachers with his ability to play a score from memory, often after one sight reading. Arturo taught himself to play the piano after he reluctantly mastered the cello because that was the instrument he was given at school. Later, on scholarship at the Milan Conservatory, he learned the required rudiments of conducting, and in a few years he changed the art form forever.

Toscanini’s big break came when he was just 19, a shy cellist on his first overseas opera tour to Argentina. He was thrust onto the conductor’s spotlight because of ongoing orchestra musician-conductor disputes that broke out during the tour.  His command on the podium with the established repertory made him an instant sensation with audiences. By the time he was back in Italy at age 20, he was the most sought after young maestro receiving unprecedented praise for his conducting.

He soon became renowned for his strict standard of musical excellence from himself and the entire orchestra, standing up to impresarios in demanding fairness and artistic control or else he threatened to walk out. Genuinely modest and not concerned about money or celebrity, Toscanini was all about the music and his artistic integrity.

Back in Italy in the early 1900s, La Scala had been closed for after a complete artistic and fiscal meltdown. Aristocrats and government officials in Milan created a trust for its rehabilitation and they chose Toscanini to orchestrate the reopening—a popular choice, but not without some influential Toscanini detractors trying to keep him out or at least shorten his tenure.

Toscanini could be hard on musicians to get orchestras in shape, but he was also their staunch advocate for decent working conditions and fair pay. Artistically, the musicians completely respected him. He walked out on productions that he knew were not musically ready or had shoddy production values. He immediately made changes in how opera was staged, at La Scala, for instance, under much protest, he introduced vertical stage curtains and insisted the on keeping the house lights off during performances. He also forced the decision to have the orchestra pit constructed at La Scala.

Toscanini completely rebranded La Scala, commercially and artistically, but he still wasn’t given due respect and wasn’t making enough money. In 1907 he was offered a third tour in Argentina for a fee of five times what he was offered at La Scala. When the Metropolitan Opera in New York made a generous offer, giving him complete managerial and artistic control and sharing the post with Gustav Mahler, he accepted. A new era in international opera had begun, and he was leading it. His judgment was so regarded that an aged Verdi considered him the best interpreter of his operas, Wagner’s descendants preferred him, and a young Puccini sought Toscanini’s advice for revisions to his scores.

His artistic innovations continued to change the international scene on two continents. Sachs gives a fascinating account of Toscanini’s remaking Paris Opera Orchestra, where the French musicians who at first lodged formal complaints about the maestro’s methods ended up at his feet in admiration.

Toscanini’s years at the Metropolitan and his huge success as musical director-conductor of the NBC Symphony Orchestra brought classical music to the homes of millions of Americans.

Toscanini also became a leading figure of the antifascist resistance in Europe. As Mussolini was gaining power, Toscanini refused to allow his La Scala orchestra to play the Fascist anthem, at his own peril. And in the 30s, as Hitler gained power and Fascism spread across Europe Toscanini gave his time and money to fight on the side of human rights. He fought tirelessly to raise money for Jewish refugees and war relief for civilians in Italy. He used his international clout to help Jewish musicians and composers to escape to the US before they were arrested or murdered by the Nazis.

As in-depth as he is in his analysis of many defining musical and political events, Sachs also doesn’t skimp on Toscanini’s dramatic and full personal life, from his intense relationships with his children Walter, Wally, and Wanda, to the complexities of his marriage to his devoted wife Carla, who tolerated his many affairs.

Sachs is on the faculty at the Curtis Institute of Music and his impeccable research and dimensional portrait of the Toscanini and his times is a towering achievement of the biographer’s craft.