Topics of Conversation: A novel 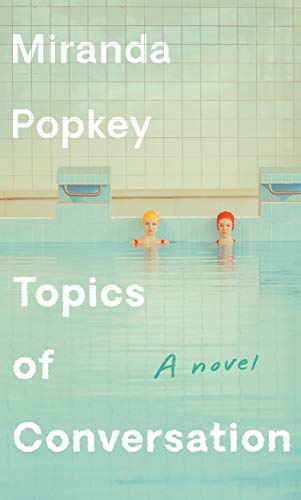 “Topics of Conversation is a smart, well-articulated and -designed novel. Popkey gives credence to women’s experiences—the good, the bad, and the ugly—by creating credible narrators who tell their stories.”

Miranda Popkey’s aptly titled novel, Topics of Conversation, talks of women’s lives, including their desires, and pain, mostly through the voices of female narrators. Popkey deftly captures a particular group of women’s voices and confessions through her unnamed narrator’s “conversations” with other women.

Topics of Conversation is organized chronologically, from the years 2000 to 2017, in a series of vignettes. Each story is framed by the primary female narrator who converses mostly with other women, who narrate their stories within her own story. The novel opens in 2000 in Italy when the narrator, recently graduated from college, works as a nanny in Italy for a well-to-do friend’s family. Her friend’s mother Artemisia, an Argentinian psychoanalyst, is the first woman to tell her tale within that of the narrator. The novel concludes 17 years later in the San Joaquin Valley of California.

While Topics of Conversation is generally high-brow, primarily narrated by a woman who was in a PhD program in English, Pokey seamlessly constructs and differentiates her various speakers. For instance, Artemisia comes across as a worldly, more experienced psychoanalyst; the narrator’s mother is credible as a cheerful alcoholic from Los Angeles; and her academic friends are believable with their cigarette smoking, jargon-spouting, and name-dropping.

In one of the most interesting chapters, the narrator, who recently left her husband, returns to her parents’ house in Los Angeles, where she drinks and retreats from the world for a while. When watching videos, she comes across a 45-minute piece titled “Norman Mailer Documentary Interview Outtake.” The video captures an interview of an older, working-class women who mingled with the literati and attended the party at which Mailer stabbed his wife, Adele.

Popkey “transcribes” the interviewee’s words into her narrative and includes wonderful descriptions of her gestures and affect. After leaving the party with her boyfriend the woman in the video narrates: “And then we kept walking. At some point I said, Bill, your friend Norman stabbed his wife. And he said, quickly he said, Did you see a knife, and She said she fell on broken glass, you must have heard that, and I said No, I heard someone tell her to say that.” Popkey beautifully constructs the woman’s colloquial, staccato manner and tone differentiating her from some of her more erudite, literate characters or narrators.

Topics of Conversation is a smart, well-articulated and -designed novel. Popkey gives credence to women’s experiences—the good, the bad, and the ugly—by creating credible narrators who tell their stories.