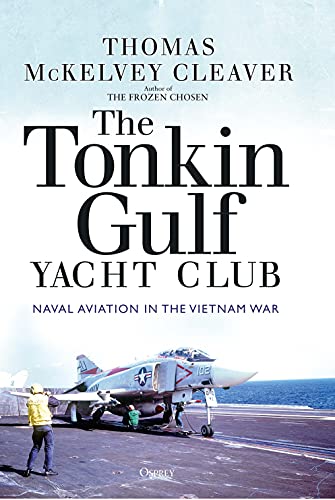 Naval aviators fought a long and costly campaign against North Vietnam from 1964–1973, flying missions against what became one of the most sophisticated air defense systems of the Cold War. In this comprehensive new history, the author examines this air campaign not only from the American, but the Vietnamese side, using many new previously untapped sources.

The author begins during the controversial action in the Gulf of Tonkin during August 1964, when a series of naval actions between US destroyers and North Vietnamese torpedo boats became the casus belli for the commitment of American troops and airpower directly into the Southeast Asia conflict. Naval aircraft immediately responded to these actions, conducting air strikes against military targets that would soon escalate, along with the US Air Force, into a continuous air campaign lasting until 1968.

However, as the author notes, the US military, particularly naval aviation, was not prepared for a sustained conventional bombing campaign and aerial combat against what was considered a third-rate foe. US aircraft, weapons, and doctrine had been almost entirely oriented toward fighting against Soviet nuclear bombers during a strategic nuclear exchange, and it soon became apparent that the small numbers of North Vietnamese fighters could more than hold their own in the dogfights that occurred during what became known as Operation Rolling Thunder.

In addition to challenges with aircraft, weapons, and tactics, naval aviators also faced onerous rules of engagement and target selections made by the hyper-political Johnson Administration that had no real cultural or strategic understanding of the realities of the conflict. Aviators suffered severe morale problems as combat attrition soared without concurrent military results, and pilots facing repeated combat tours became more concerned with surviving their missions than worrying about hitting targets that were increasingly ineffective against stopping the North Vietnamese ability to wage war.

When President Johnson called a bombing halt in 1968, which lasted until the Nixon Administration took over, the navy decided to take a hard look at the results of their air combat engagements and made the critical decision to review and make improvements across the board—aircraft, weapons, and most important doctrine and training.  Using test results from captured Soviet aircraft, the navy set up the famous Fighter Weapons School—soon known to the world as Top Gun. Accepting the reality that most air combat would take place at short ranges in traditional dogfighting engagement, naval aviators learned to exploit enemy weaknesses while overcoming the limitations of their own aircraft and learning how to better utilize improved air-to-air missile systems.

When the North Vietnamese launched their 1972 offensive, President Nixon resumed bombing North Vietnam, loosening many of the previous rules of engagement and targeting restrictions.  When the North Vietnamese sent fighters back into the air, they now faced better trained aviators with improved weapons and naval aviation began to dominate the skies over North Vietnam. Improvements to tactics and weapons for defeating surface to air missile systems also decreased the losses to American men and aircraft as the tempo of air operations increased throughout 1972, culminating in the B-52 Christmas bombing effort that lead to the Paris Peace Accords of 1973.

Of course, the North Vietnamese merely considered this an interlude to get the Americans out, and when a renewed offensive began in 1975, the South Vietnamese military and government quickly collapsed with their abandonment by a US government still mired in the aftermath of Watergate and determined not to get pulled into the conflict.  Naval aviation played a final bitter role covering the withdrawal of US personnel and some South Vietnamese allies as the Communists completed their conquest, the last military action occurring off Cambodia to free the merchant ship SS Mayaguez, seized by the Khmer Rouge forces as they overran the Cambodian government.

The author does an outstanding job of highlighting both the shortcomings and triumphs of naval aviation during this period, including some fascinating insights into the three major aircraft carriers mishaps that resulted in the deaths of hundreds of sailors and the loss of dozens of aircraft, showing the inherent danger of carrier flight ops in a combat environment. Decisions made by admirals and politicians had their own effect on how the combat played out during these turbulent years, and it took some courageous actions to ensure naval aviation was able to incorporate harsh combat lessons learned into the force to make it the potent weapon it became during the end of the Cold War and into the 21st century.