The Tomb Robber and King Tut 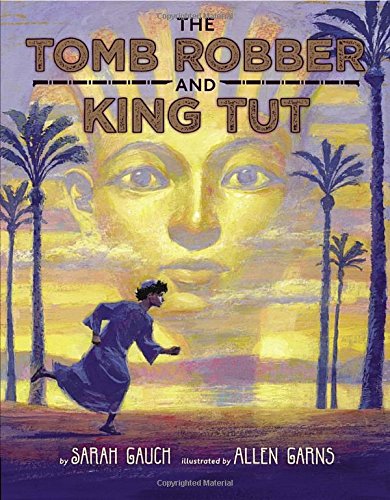 How does a little Egyptian boy who comes from a family of "tomb robbers" get a chance to participate in an archaeological dig to find King Tut's tomb?

In late 1922, Howard Carter, a respected archaologist from Britain returned to the Valley of the Kings in Egypt for his last season. He had been working for five years to clear the Valley down to the bedrock in search of King Tut's tomb, which he was convinced lay beneath the rubble. He had already found a clay cup, gold foil, and clay seals with Tut's name on them, and he just knew he was close.

In the ancient village of Gurna on Luxor's West Bank, where the dig was occurring, a young boy named Hassan is convinced that he simply must participate in the dig. Several village workers, those who have not been spooked about the jinns and dark omens some claim haunt the dig, are being allowed to help, and Hassan wants to be one of them. Even though his father insists that the family is now a farming family and Hassan is needed in the fields, Hassan manages to convince him that he can be spared. When he finally gets permission, Hassan rushes off to the rayyis, the native foreman, to convince him that he will work hard and can be trusted. Miraculously, the rayyis gives him the chance of a lifetime.

Soon they have excavated far enough down in the earth to find a door. "Slowly I descend the sixteen steps. Kneeling on the ground, I shovel the last rubble into my basket. My hands are raw and my back aches. That's when I see it. A stone of blues and greens, framed in gold and shaped like a beetle! It's heavy and beautiful, and very old. I look at the treasure for a moment, and then I hear footsteps. I swivel around and . . ." Does Hassan do the right thing and hand the priceless scarab over to the rayyis?

The Tomb Robber and King Tut is a marvelous picture book that will engagge children as they learn a bit about the history of ancient Egypt and the exciting discovery of King Tut's tomb. Gorgeous, painterly illustrations by Allen Garns practically dance with golden light, capturing the characters and the environments with muted details and the rich colors of the earth.

Anyone who has ever tried to imagine the joy and breathlessness of the moment of the discovery of King Tut's tomb will rejoice in this tale, imagined by author Sarah Garns, who has lived in Cairo for twenty years with her family. A wonderful addition to school libraries and classroom collections.