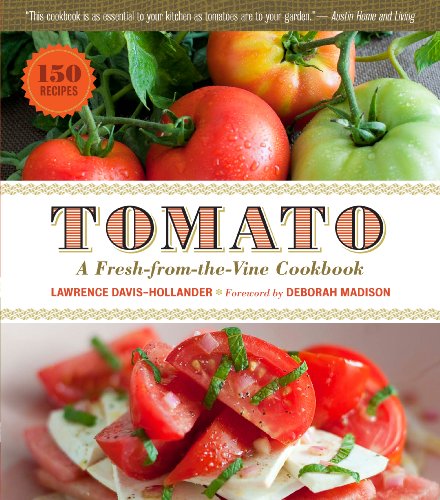 For most of us, it wouldn’t seem like summer without fresh, ripe tomatoes. Just ask anyone who lives in the Northeast and suffered a severely diminished tomato season in 2009 owing to a wet, cool spring that brought on late season blight and ruined many a tomato plant. Without our usual share of tomatoes, the summer of 2009 seemed short and unmemorable.

Of course the best way to enjoy the first tomatoes of the season is to pluck one straight off the vine and bite into it while still standing in the garden so that you can feel the warmth of the sun on its skin as it touches your lips. If that’s not possible, a simple salad of sliced tomatoes with a little salt and maybe a drizzle of olive oil will do just fine. Let’s face it though, as the season progresses we all begin to wonder what we are going to do with all those tomatoes piling up in our kitchens. It’s at this juncture that a cookbook dedicated to the tomato might come in handy.

In Tomato you will find many of the usual recipes we have come to know along with a few quirky entries like Green Tomato and Chocolate Cake which includes not only 1 cup of puréed green tomatoes but 1 cup of beer as the liquid ingredients (really!).

Recipes have been collected from several well-known chefs around the country who promote sustainable cuisine as well as other sources. While they are representative of cuisines from around the world, most have a Mediterranean or Mexican bent such as Romesco sauce (well worth the effort), Spanish-Style Fish with Tomatoes and Potatoes, and Hominy Arepas with Roasted Yams, Sun-Dried Tomato Salsa, and Chipotle Tofu Cream.

Davis-Hollander is a proponent of the Slow Food movement, but the emphasis in this cookbook is on “slow.” This isn’t like a Mark Bittman column for The New York Times where you might find 101 simple and quick ways to cook with tomatoes. Most of these recipes take a good deal of time to prepare, as many of them call for cooking the tomatoes down into some kind of sauce or otherwise have multiple steps. These kinds of recipes seem at odds with hot weather cooking when tomatoes are in season. Moreover, unless you grow them yourself, few of us would spend what it would cost to buy two to three pounds of tomatoes to use in a dish where the tomatoes play only a supporting role. (As the recipes suggest, you can substitute canned tomatoes but that defeats the purpose of “fresh-from-the-vine.”)

Still, for home gardeners as well as those who frequent farmers’ markets and want to learn more about all those funny looking heirloom tomatoes that have become popular in recent years, there is some interesting information to be found. In the chapter “Cooking with Heirloom Tomatoes,” you will undoubtedly delight in learning the names of some of these odd looking varieties: Pruden’s Purple, Lambert’s General Grant, Oxheart, Eva Purple Ball, or Black from Tula. It would have been wonderful to have photos to accompany these names, so unfortunately you are on your own if you want to try to hunt them down.

In addition to providing a primer on heirloom tomatoes, Davis-Hollander also intersperses other interesting tidbits on tomatoes throughout the book, like the origin of tomatoes (South America), medicinal uses, best tomato festivals in the U.S., early tomato recipes (the first one in English dates to 1758), and more.

Finally, for those of you with a surplus of tomatoes on your hands, there is a good chapter on preserving your excess bounty whether through canning, freezing, or drying. Or if you prefer, recipes are provided to make ketchup, tomato juice, chutney, or jam.

Some cookbooks are more than just about the recipes. Tomato, while offering few fast and simple warm-weather recipes, certainly offers plenty to chew on when it comes to learning more about one of America’s best-loved vegetables.