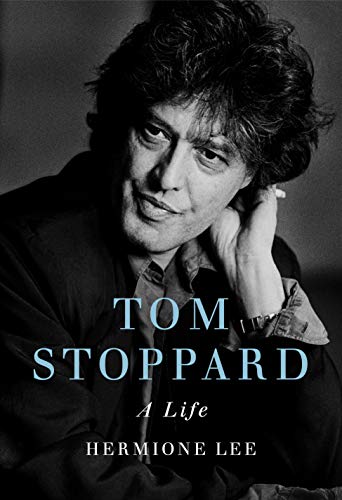 Hermione Lee’s biography of this celebrated playwright spans the six decades of his career. Except for some over detailing of some of Stoppard’s important plays, Lee turns in a masterful performance of the biographer’s craft.

Stoppard was born in Czechoslovakia in the ’30s, the son of Jewish parents, Marta and Dr. Eugene Straussler. His family had to flee when the Nazis stormed in; they sought political asylum in British colonial Singapore. Tom was eight and his brother Peter 10. Shortly after they arrived, his father, now part of the British medical corps, was killed in action, lost at sea during the Japanese invasion.

Their mother emigrated to India, where she could find work and support her sons. She later married a British officer, and the family moved to Scotland. Stoppard’s mother kept their shared pasts mostly a secret for the misguided reason of wanting to protect her sons from it. The marriage was strained, and the brothers were often at odds with their stepfather. They were devoted to their mother, but both were independent boys.

Tom was a smart student, but on his own track, not headed to the upper levels, he quit formal education when he was 17. He moved to Bristol and hired as an apprentice journalist. He had early if haphazard success as a columnist, writing under his own name and a snarky non de plume. He became a popular theater critic and started to make inroads in the theater. He began writing radio plays and one-acts, with erratic success, eventually quitting journalism and becoming a full-time playwright.

He premiered a rough version of Rosencrantz and Guildenstern Are Dead at the Edinburgh Festival Fringe in 1967. The overnight notices were dismal, but a few select critics took notice, and audiences were already convinced that Stoppard wrote a hit. It was almost immediately restaged in London to gushing notices and commercial success.

Meanwhile, Stoppard was madly in love with Jose Ingle, an aspiring model. As happy as they had been, Jose had difficulty dealing with Stoppard’s celebrity and his consuming regimens of writing and traveling. Jose was in clinical depression after the birth of their first son Oliver and retreated socially. Stoppard tried to be supportive, but not in ways that were helping as Jose was harboring resentments. Friends picked up on the tension and the couple had terrible rows in public. Stoppard hired a live-in nanny to take care of Oliver as Jose was unable to cope.

Stoppard fell in love with Miriam Stern, who was also married, and both couples were good friends up until Jose found love letters from Miriam to Tom. It was a betrayal that finally had Stoppard admitting that he wanted an immediate divorce.

From Jose’s viewpoint, this was complete betrayal, and she was never able to pull her life together and move on from the bitterness she felt. Because of her clinical emotional problems and alcoholism, Stoppard was granted custody of Ollie and Berny, another son, as she continued to drift. Stoppard was in one of his most artistically and commercially successful periods.

He was also in ecstatic love and building a new life with Miriam, a doctor, author, and TV commentator. Stern was pregnant when they were married, neither of them slowed up their careers, but both were committed to having a fully private and fulfilled home life with Stoppard’s sons. Now both in demand publicly and privately, they still were able to have wonderful years together.

Eventually, they grew apart, and as private as Stoppard kept their lives, there was speculation mostly through cues his colleagues were seeing in the situations and characters that were dramatized in his plays during the ’70s.

Stoppard fell in love with one of his favorite actors, Felicity Kendal, who starred in several of his plays.

Even though Tom and Miriam had been separated for two years and able to keep it quiet, Stoppard asked for a divorce in 1990, which surprised and upset Miriam. Even though they remained, publically at least, on amicable terms, Stoppard was deeply in love with Felicity Kendal, who was also in the throes of a divorce. Their marital dramas were eventually exposed by the tabloids. Multiple public and private affairs brought the playwright to a crossroads.

He was becoming more visible as an anti-Communist voice and advocate for censored and imprisoned journalists, writers, and artists in Europe. He lobbied for the release of Vaclav Havel, his fellow Czech playwright, who was imprisoned by the Communists. Stoppard was in regular contact and a public voice for Havel during the Prague Spring velvet revolution that culminated in Vaclav being elected president.

As tumultuous as these years were, on and off the stage, Stoppard, in the ’90s, was about to produce a string of plays that are among his most admired. Even though Stoppard had many theatrical and literary signatures, his range on stage and as a screenwriter demonstrated a commitment to challenge himself to experiment and push the envelope of his imagination.

Stoppard was always developing as a writer, and if the public rejected that it was part of the territory. He was very much a part of the theatrical establishment on the worldwide stage. Most of his plays in English had high-profile American and European productions. He jetted around nonstop to oversee the productions. Stoppard was much in demand in Hollywood, the principal scriptwriter for Spielberg’s Empire of the Sun. The director also tapped him from then on as a script doctor, for which he was handsomely paid, but usually uncredited onscreen at Stoppard request. Stoppard’s script for Shakespeare in Love and Brazil (co-written with Terry Gilliam) were also international hit films.

He admirably raised the money and directed a respectable film adaptation of his brilliant Rosencrantz and Guildenstern starring Richard Dreyfus and the soon-to-be film stars Gary Oldman and Tim Roth.

Stoppard had long stretches away from the stage, but his mid-career and later plays included the hits Jumpers, Travesties, Hapgood, The Real Thing, Arcadia, The Invention of Love, The Hard Problem.

Some of Lee’s granular detailing of the nine-hour opus The Coast of Utopia, chronicling Russian history, real-life characters and literature, on top of the circumstances of Stoppard writing it, nearly sabotages the pulse of the whole book midway through. In contrast, Lee’s crisp account of Stoppard’s next play, Rock & Roll, jumps it back on Lee’s mainline narrative track.

Also fascinating is Stoppard’s emotional journey to embrace his Czech-Jewish heritage and what happened to his family. His 2014 play Leopoldstadt was torn apart because of the protagonists’ Jewish heritage and marriages of couples of different faiths, set in three eras in Vienna through the first half of the 20th century, with a cast of 40. It was hailed as Stoppard’s most emotionally raw and tragic play.