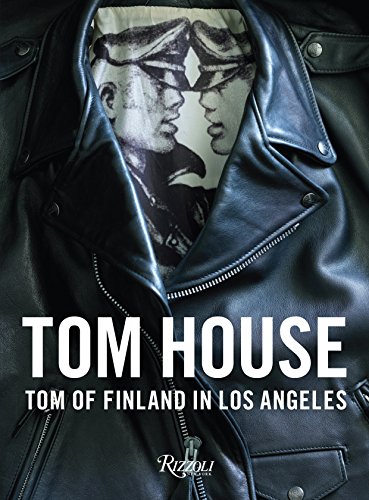 Located in the Echo Park neighborhood of Los Angeles at 1421 Laveta Terrace is Tom House (or the Tom of Finland House). “It is the place where the revolutionary homoerotic artist Tuoko Laaksonen (1920–1991) lived and worked for much of the last decade of his life.”

Tuoko Laaksonen (better known as Tom of Finland) created illustrations that captured the gay leatherman aesthetic. In the Foreword, Mayer Rus tells the story of how Tom House became a home for Tom of Finland and how Durk Dehner was “the man responsible for reclaiming Tom's legacy from the ghettos of illustration and pornography.”

Rus recounts the circuitous route to establishing the Tom of Finland Foundation in this house in Echo Park. “By the time Tom returned to L.A. In late 1979, Dehner had pooled his resources with his current lover, his ex-lover, and his ex-lover's lover to purchase the house on Laverta Terrace. If that sounds like a set-up for a gay sitcom, the truth is not far off—the place proved to be the perfect backdrop for romantic round robins and gay fellowship.”

Martyn Thompson's photography is juxtaposed against Tom of Finland's preparatory drawings. The house itself is a gabled Craftsman repurposed with a “kaleidoscopic array [that] embodies the unapologetically phallocentric ethos that animates Tom House.”

The preparatory drawings will be familiar to the images seen in Taschen's Tom of Finland: The Art of Pleasure. Tom House offers a glimpse of where Tom of Finland created his iconic art, from the bookshelves to the interior design. Several photographs survey the infamous sex dungeon. This is a book that celebrates the still transgressive world of gay leathermen and Tom of Finland's place in Los Angeles’ architectural history.