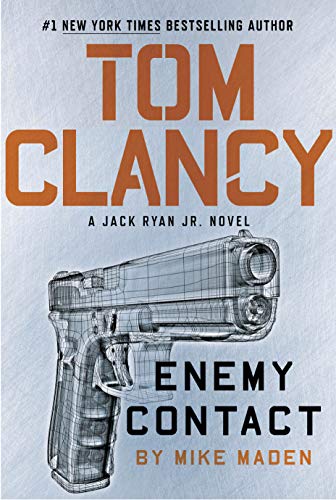 “Maden has definitely made this character and his supporting cast his own in this excellent third trip through the Tom Clancy universe.”

How much intrigue and mystery can be packed in one novel? Mike Maden really tests the limits in the new Jack Ryan Jr. novel. Enemy Contact takes off like a Navy fighter shot off a catapult and tries furiously to keep up the pace of suspense and techno-thriller for over 400 pages.

As always, Jack Jr. is at the center of the book, conducting a covert surveillance operation for the Campus to determine if there is a threat to America from inside the government while simultaneously trying to carry out the dying wish of a close friend. The author really focuses on the emotional and mental state of Jack Jr. in this book, delving into the psychological toll paid for the double life of a covert operative who has to make split-second decisions that could mean life or death for himself or his comrades.

Jack Jr. spends a great deal of time in retrospection in this book, making him a very sympathetic character that the reader can’t help but like, even as the villains come across as a bit stereotypical. Along the way, Jack encounters a character he fears could be his future, and although Jack exhibits the determination to always do the right thing, he begins to understand that decision often comes with a steep price.

Interestingly, for the complex group of characters that have been developed over the course of this series, most of the other members of the Campus team are bit players throughout the book, an interesting choice by the author, but one that definitely puts the focus on Jack Jr. Presumably the author did this to focus on the development of the main character, but there are clearly some encounters during the book where Jack could have used some experienced backup.

The reader will quickly become immersed in a complex series of interweaving plotlines, and as the pages turn, the sprint to discover the identity of the traitor leaking America’s most important secrets keeps the reader hooked as the plots begin to slowly merge into a breakneck race to conclude all the plots and conflicts by the end of the book. The reader is certainly left wondering how all of the various plots will be resolved, and although the final result will leave the reader satisfied, one can’t help but wonder how Jack Jr will carry on with the mental burdens from this plot.

Fortunately, the author clearly has a direction he wants to go with future novels, and there are certainly plenty of unresolved personal and professional issues for Jack Ryan Jr. to confront in his next adventure.

This will be an excellent summer beach read with all the plot twists, spy craft, and technology ripped from the headlines, and favorite characters of this series. Maden has definitely made this character and his supporting cast his own in this excellent third trip through the Tom Clancy universe.