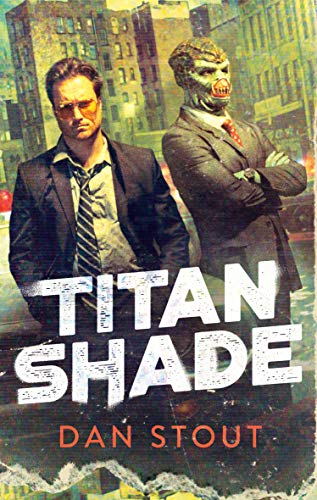 “Titanshade satisfies well enough to make you start over at the beginning to see what you missed.”

A middle-aged human detective is saddled with a non-human rookie cop investigating a crime that has the potential to shake the very foundations of the metropolis they both call home. Sound familiar? No, it’s not Alien Nation, the 1988 sci-fi flick starring James Caan and Mandy Patinkin, but the debut from Ernest Hemingway Foundation Short Story Competition winner Dan Stout.

Set in a techo-fantasy world where magic is rarer than honest politicians, Titanshade is a city stuck in the technological equivalent of the US in the ’70s, complete with disco and 8-track players. Homicide cop Carter is drawn into the murder of a Squib (a humanoid frog-like being) which could have severe economic repercussions for Titanshade, a town whose oil boom is rapidly drawing to a close.

As the black sheep of the department, he’s the kind of guy who gets the job done, but never receives the credit, which puts him on the outside looking in. Add to his misery of breaking in an idealistic rookie cop named Ajax, a Mollenkampi (think humanoid lizard a bit like the Predator) and the bonus of trying to protect a woman he considers a daughter, the stage is set for mystery and mayhem.

Unfortunately, the world building in this book remains rather incomplete, although some aspects are extraordinarily well written. Given that Stout dives into a tired trope, he deftly handles Carter’s aching angst beautifully, yet there are so many more opportunities he missed to bring depth to the world, to add to the noir feeling with which he attempts to hit the reader. This is a crying shame considering his skillful use of prose. The best part of the book isn’t the murder mystery, but Stout’s ability to bring his characters to life, turning them into people you care out (or hate, depending).

“Sometimes it doesn’t feel good to catch the bad guys.”

The story tries come out of the gate fast with the murder of the Squib ambassador, but then it begins to drag a bit as it sets up character development and plot exposition.

The good thing, however, is as the story progresses, it becomes better and better, growing upon the reader until the pages blur with the effort to finish the book before going to bed. All in all, the book grows on the reader, slowly at first, but then with the speed of a rabid kudzu vine egged on by supervillainess Poison Ivy. By the end of the book Titanshade satisfies well enough to make you start over at the beginning to see what you missed.