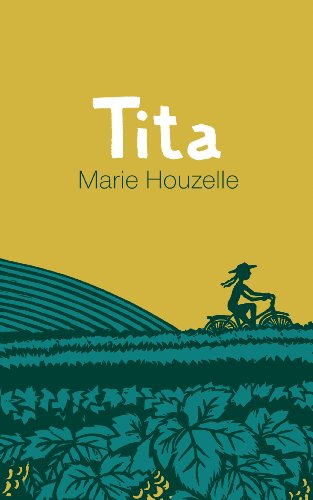 “Tita is not an exercise in blind nostalgia for a lost past. It is a rich and warm, yet open-eyed portrait of a place and time just beyond our current reach. It’s a book worth savoring.”

Set in a small town in the South of France in the 1950s, Tita relays its charm in its voice and in the world it depicts.

The voice is that of seven-year-old Tita. She is both sage and naïve. She can tell you the correct rule for whether to put an “e” on tout in every grammatical situation, but she does not recognize the tensions and estrangements that haunt her parents’ marriage. Even when she learns that she was born before her parents married, she does not understand the implications of this nugget except that she can use it to embarrass her mother into answering more of her questions. She knows it’s a key piece of information, but she can’t fit it into a larger context.

Young narrators are a tremendous challenge to write. The dangers of saccharine tone or planting far too much knowledge into a young mind can trip up any writer. Some readers may accuse Houzelle of the latter failing because she builds a precociously smart child, but that would miss the subtlety of what Houzelle is doing. Tita knows a great deal, much of it entirely bizarre for a primary school child.

But on closer look, because there is so much of importance that Tita doesn’t grasp, we can believe that she’s happened haphazardly upon what she does know through her voracious and age-inappropriate reading. In addition, the gaps in her understanding, which she usually doesn’t recognize exist, provide an ironic humor throughout—skillfully done humor and not overplayed.

The opening paragraph demonstrates both these aspects, the gaps and the humor.

“I’d like to be a nun. Or a saint. In the classroom today, after we finish reading the mass like every morning, fast, one paragraph each, round and round, in Latin, mademoiselle Pélican asks, “Do any of you feel called to the consecrated life? Put up your hands!” My hand is the only one, and she looks at me with blatant misgiving. Although I’m keen on everything religious, know all my prayers perfectly, and go to mass on weekdays as often as Mother lets me, Pélican doesn’t seem to like the idea of me as a nun. Because I’m not meek enough, I guess. Because I don’t leave her alone, don’t accept everything that comes out of her mouth as the absolute truth. Who says she’s got the absolute truth?”

What the reader begins to understand as the narrative moves along is that Tita longs for anything that will take her away from what she views as her boring life—hence her entirely misdirected desire to be a nun or saint. She’s got just enough self-understanding to recognize that her teacher objects to her insolence, but not enough worldliness to realize that the last place for a questioner of authority is a nunnery.

We’re laughing, but we’re also intrigued by this child whose understanding can be razor sharp or dense as a thicket. Where will this odd combination take her?

It’s also ironic that Tita sees nothing but boredom in many of her required activities: that Tita’s life would typically be viewed as idyllic by the outside observer adds to the piquancy of this tale. Childhood is supposedly concerned with playing simple games and delighting in sweets, but not with Tita. She does love to race around the gorgeous countryside on her bike and so the reader gets a full view of this semi-rural, about-to-disappear world.

The novel’s world of a small French town is not so distant in time—the 1950s were the childhood years for a lot of us still very much alive—but Houzelle takes the reader a long way from the 1950s most people remember. She portrays an insular world on the tipping point.

The second World War, increasing industrialization and most of all the gradual abandonment of old ways of thinking, of traditional customs and social norms have put pressures on the people of this rural locale. The reader knows early on how fragile everything here is: the wine business that sustains the family fortune, the Catholic school system that Tita toils within, the relationships so vividly painted for us between children, siblings, old friends, spouses.

Everything is suffering from intrusive change that no one is prepared for. Progress, such a naively embraced notion in America in the 1950s, is not welcomed in the small town of Cugnac with open arms, but it nonetheless makes its rather ugly face known anyway.

Graciousness, the reader senses, will pass away, but so will some of the prejudices and limitations. Tita’s longing for a larger world is symbolic also in a good way of the changes underfoot. Tita might gain some wider horizons for that bright mind if she could leave behind her shortsighted teacher, thrust unnecessarily on Tita because all children of wealthy Frenchmen are sent to the Catholic school without consideration whether some other school might be better. Now with change afoot, even such fundamental “rules” are loosening their hold.

Both good and bad will be lost and gained in the process. There’s nothing simplistic about this novel. Tita is not an exercise in blind nostalgia for a lost past. It is a rich and warm, yet open-eyed portrait of a place and time just beyond our current reach. It’s a book worth savoring.